or faux hawk or fohawk [foh-hawk]

What does fauxhawk mean?

A fauxhawk is a hairstyle that resembles a mohawk, with relatively short sides and a longer hair on top.

Where does fauxhawk come from? 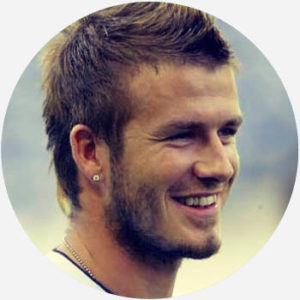 Fauxhawk is a blend of the word faux, which is from the French word for “false,” and mohawk. The term appears as early as the mid-1990s.

A mohawk is a hairstyle where the sides of the head are shaved, leaving only a long strip of hair running vertically along the scalp from the middle of the forehead to the nape of the neck. This strip of hair is often dyed and spiked to stand straight up, A fauxhawk, by contrast, is a less dramatic style, with more length left on the sides and often less height and greater width on top, hence a “fake mohawk” or fauxhawk.

The fauxhawk gained popularity in the early 2000s. Soccer player David Beckham notably wore one during the 2002 World Cup, helping boost its mainstream appeal, but the style was popular among alt-rock musicians like Green Day lead singer Billie Joe Armstrong as well.

There are many different types of fauxhawk. From near-shaven sides and a longer top to long hair with a built-up top like a pompadour, the fauxhawk has a great deal of flexibility, which may help explain it’s mainstream adoption. Other factors that may have contributed to its popularity are its gender-neutral appeal, as it is sported by men and women alike, and its ability to be styled into something more suitable for business environments.

The fauxhawk bears a certain resemblance to the undercut, which gained its popularity in the 2010s. The undercut consists of closely-shaved sides and back contrasted with longer hair on top. Like the fauxhawk, the undercut is characterized by the varying lengths between the sides and the top.

“The man bun is today's fauxhawk”
@JAM3S_HETFIELD Twitter (March 24, 2017)
“Faux hawk or elegant updo? Depends on your perspective. I say both.”
brushworxchristinepay Instagram (April 28, 2017)
“Glad we've got that settled. Especially by a guy with a high-top fade combined with a fauxhawk.”
Brian Mansfield, “The strange case of Dexter Ward,” USA Today (January 27, 2017)
SEE MORE EXAMPLES

Fauxhawk is often spelled fohawk because of the way faux is pronounced, like “foe,” and as an alternative way to blend its source words, with the f- coming from faux and the –ohawk from mohawk.

This is not meant to be a formal definition of fauxhawk like most terms we define on Dictionary.com, but is rather an informal word summary that hopefully touches upon the key aspects of the meaning and usage of fauxhawk that will help our users expand their word mastery.