What does FFFF mean?

FFFF is a vulgar slang acronym that refers to the misogynist motto, “find ’em, feel ’em, fuck ’em, and forget ’em.” The ’em in this case? You guessed it: women-in-general. There are variations on FFFF, including the total number of Fs and what specifically they stand for (e.g., fool, feed, etc). It can also be a self-censoring euphemism for that classic four-letter F word.

Where does FFFF come from? 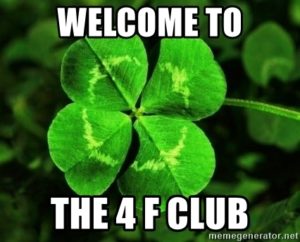 FFFF, also known as the Four Fs or 4-Fs, has been around in forms since at least 1922. It is a crass, disrespectful, macho motto for treating women as disposable sex objects.

An early form went find ’em, feel ’em, fuck ’em, and forget ’em. Specific meanings of the Fs can vary, including fool, finger, and feed, and can be added to form Five Fs. 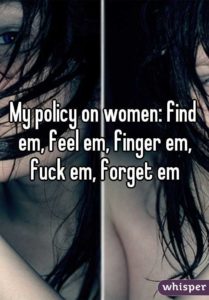 One notable example of FFFF comes in the 1933 film I’m No Angel, starring the legendary Mae West, who advises her maid to “find ’em, fool ’em, and forget ’em” regarding men, a subversive riff on the original. The rap group N.W.A. released the song “Findum, Fuckum, & Flee” in 1991. Entries for FFFF were added to Urban Dictionary in 2002.

The term came into the public spotlight in September 2018 during hearings on sexual assault allegations against Supreme Court Justice Bret Kavanaugh. His 1983 high school yearbook contained the note “FFFFFFFourth of July” next to his picture.

Many thought the Fs to be a reference to the vile FFFF treatment of women, especially based on the testimony of his chief accuser, Dr. Christine Blasey Ford. Questioned by Rhode Island Senator Sheldon Whitehouse about the Fs, Kavanaugh claimed: “One of our friends, Squee, when he said the F word starting at young age, had kind of a wind-up to the F word. Kind of a ‘FFFF’…And it became an inside joke for the…F word.” Hmmmm… (Four Ms in that, we’ll have you note)

We called it the Four F club Find them Fill them Fuck them Forget them In the sixties it was wrong then and now 🤮🤮🤮🤮
@_dlh52, September 2018
Just as there are no bad babies, only colicky ones, there are no bad high school and college-aged males, there are only those who suffer FFFF colic. Finding, Feeling, Fu**ing and Forgetting girls is believed to be a congenital disorder. Quarantine is sometimes, though rarely, recommended until the bout passes. Isolation usually lasts up to six months, known colloquially as, hangin’ with Brock Turner.
Anastasia Basil, Medium, October 2018 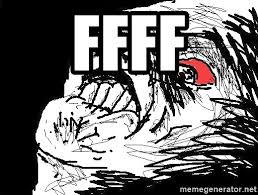 FFFF is a misogynistic term, implying treating women as sex objects. That doesn’t stop men from joking about–or, in certainly too many instances, carrying out–the FFFF credo. It’s something of a meat-headed boast, if you ask us, especially when men who say they live by FFFF are part of an FFFF or 4-F Club–an ironic play on the wholesome image of the 4-H Club.

Like this page, where he signs his letter like so many east coast kids at that time – part of the lyrics to the 4 F Club, by the band The Mentors? “Find her, Feel her… – you get the point…” Love, Kavanaugh… handwritten and all. pic.twitter.com/UExxBpe94q

Elsewhere, FFFF can be used as self-censoring euphemism for fuck…

my v app is being a bit** right now. ffff no one else seems to have this problem. load stupid vapp

…or it can be used as onomatopoeia for guffawing in amused disbelief.

PLEASE listen to the loud ass fanchants just when they are walking to receive an award FFFF the world really is bts stage and we just living in it @BTS_twt pic.twitter.com/vG5zUWhS9y

This is not meant to be a formal definition of FFFF like most terms we define on Dictionary.com, but is rather an informal word summary that hopefully touches upon the key aspects of the meaning and usage of FFFF that will help our users expand their word mastery.