What does fux mean?

Fux is an internet slang form of fuck.

Where does fux come from? 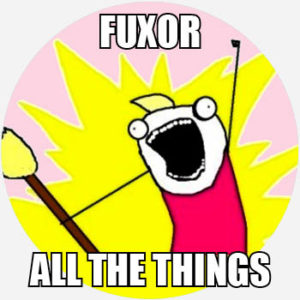 Urban Dictionary’s earliest entries for fux are from 2003. One entry defines fux as a substitute for fuck, noting it as a useful way around chatroom censors. Another defines the term as “geek-speak for ‘fucks,’” with fuck here referring to a worthless person.

The dates and content of these early Urban Dictionary entries suggest fux may be related to fux0r (a leetspeak term for fucker), which has appeared in internet message boards since as early as 2000. Throughout the 2000s, fux0r was often used to mean “fucked up” or “broken,” e.g. My computer is fux0r3d.

Fux first appeared on Twitter in May 2007 as a mild euphemism for an interjectional fuck: “my phone just officially died. cant even charge it now. on an old one. fux.”

In the late 2000s and early 2010s, fux, like its parent fuck, began to take on a great variety of uses and extensions. Some of these are clever neologisms. Many examples of these show up on Urban Dictionary: To fux something can be “to fix it inadequately” or can be an antonym for fix, both riffing on fuck and fix. Fuxactly adds sweary emphasis to exactly. Fuxcellent blends together fucking excellent. Fuxcited joins fucking and excited. Fuxable describes a woman who’s both flexible and fuckable. Some fux formations play with phonology. Fuxgoinon imitates the familiar greeting, “What the fuck’s going on?” Fuxat mirrors “Fuck’s it?” or “What the fuck is it?” (it’s usually asked as a clarifying question). While fux is useful as a combining form, many of these coinages are only used on very specific occasions.

In many other applications, as seen across social media, fux can be used as versatilely as the word fuck itself, whether sexually (I want to fux you) or abusively (fux you). These uses of fux can soften the vulgarity of fuck and, as with fux0r, bypass internet censorship and filtering.

One extension of fux, fux with, has taken two specialized meanings on social media. While fux with can be a substitute for “fuck with” or “mess with”, it’s widely used on social media for “dabble in” or “affiliate with.” As an example, a redditor uploaded a picture of electric guitar pedals in 2015 with the comment “What I fux with these days.” It can also be used in negatively phrased constructions. For example, a 2008 tweet reads “If you’re not watching this game, I prolly don’t fux with you.” Fast-forwarding, the comment on a 2017 Instagram post of a Mexican dish reads “If you don’t #fux with this, I can’t be your friend.” The phrase appears to be further broadening as a general expression of interest, affection, or enjoyment.

While the sense development of fux with isn’t fully clear, the two uses may be related, growing out of “fuck (around) with” as slang for “tinkering” with something as a hobby. This “tinkering” sense may have been further extended to “associate with,” yielding the “like” sense of fux, perhaps on the idea that how you spend your free time reveals what and who you value.

“If u don't like what we doing shut the fux up”
renato @santivision Twitter (September 5, 2016)
“Sometimes you have to fall back just to see who really #fux with you the long way.I'm big on #loyalty and #respect.”
@lixcir Twitter (March 24, 2017)
“If you don't fux with me then you can fucking leave”
Cal Scruby, “Fux With Me,” Boy Genius (2012)
SEE MORE EXAMPLES

Fux enjoys broad and diverse use as internet slang, usually as a substitute for fuck. While slightly milder than explicitly using fuck, fux is still widely employed in coarse and vulgar ways and therefore can be considered offensive and inappropriate. One particular fux neologism, fuxated, a possible blend of “fucked up” and “frustrated,” is often used in extremely racist contexts.

This is not meant to be a formal definition of fux like most terms we define on Dictionary.com, but is rather an informal word summary that hopefully touches upon the key aspects of the meaning and usage of fux that will help our users expand their word mastery.