What does furries mean?

Where does furries come from? 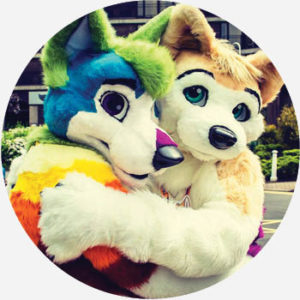 There was quite a build-up before the word furry was first used in reference to fans of anthropomorphic (anthro for short) characters. Fans of Steve Gallacci, an artist who drew anthro characters, came together at a sci-fi convention called Noreascon II (part of the World Science Fiction Convention) in 1980. This led to informal gatherings centered around anthro characters in sci-fi, comics, and animation between 1980 to 1985.

After the initial rallying together of fans, online bulletin boards started taking off in 1983, uniting furries across the globe. Though it’s not known exactly when the term furry was first used, the term furry party was used at Westercon, a “science fantasy” convention, in 1986. This led to the fandom being known as the furry fandom later in the decade. The first ever furry convention was held not long after that in 1989. This was ConFurence 0, the first of many furry conventions.

“furries who do not draw seals + sea otters with flipper feet and instead with paws and pawpads: u are weak”
Tobie @ Califur @selkiedream Twitter (February 27, 2017)
“But Disney's relationship with furries goes beyond social-media marketing schemes, spanning decades before Zootopia's development.”
Brian Josephs, “Furries Love ‘Zootopia’,” Vice (March 17, 2016)
“Halloween is another great occasion for furries to flaunt their furs as they prowl amongst the ghouls.”
Juliette Lizeray, “Lions Among Us: Singapore’s fuzzy Furries tell all,” Coconuts Singapore (February 28, 2017)
SEE MORE EXAMPLES

Furry is first and foremost a label of self-identification with the furry fandom at large. As a fandom, they prefer to be referred to as furries by non-furries too.

Furries are focused on creativity, culture, and a collective community centered around their love for anthro characters. In fact, much of furry culture exists solely in the collective imagination of the fandom, as individual furries enjoy creating their own original anthropomorphic characters. These characters might be based on a wide variety of creatures. They include real animals like foxes, as well as animal hybrids, or completely new species. Some of these characters are called fursonas (a portmanteau of fur and persona). They’re meant to represent who a person would be if they were an animal.

It’s a common misconception that the furry fandom is about every member dressing up like an animal. Some furries, but definitely not all, might don a fursuit, which is a carefully crafted, custom-made costume that represents either their fursona or another character they’ve created. These can range from as little as just a head and a tail to a full-blown mascot-esque costume.

Unfortunately, furries have also received a bad reputation in the past due to their portrayal by TV and media as sexual deviants and fetishists. While a sexual aspect does exist in the fandom, it tends to be overly sensationalized and misrepresents the core values of what the fandom is about, which is community, having fun, and creativity. Furthermore, just about any fandom will contain sexual elements. A cursory search of the more popular fanfiction or art websites can easily reveal this.

This is not meant to be a formal definition of furries like most terms we define on Dictionary.com, but is rather an informal word summary that hopefully touches upon the key aspects of the meaning and usage of furries that will help our users expand their word mastery.