Everything After Z by Dictionary.com
Previous Word: gots
Next Word: griefer

*Hits the gravity bong* So what ya think the Pokémon be doing in their pokeball?
@SaiyanAyejay, January 2018
The aesthetic downside to a gravity bong is that it looks like something a janitor whipped up using items from his closet.
Brian Griffin, The Trustafarian Handbook, 2010
And if you really want to kick things up a notch, do ‘The Knockout.’ That’s when you do a gravity bong with beer. In other words, chug your beer as you light your herbs, only to do your hit once you’ve downed the entire thing. It’ll get the party started in a hurry
David Ponce, OhGizmo!, November 2014

Where does gravity bong come from? 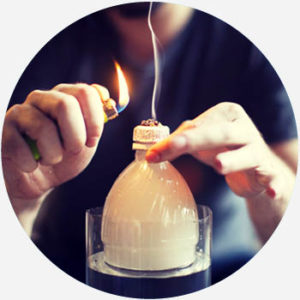 Humans have been smoking cannabis, among other substances, from bongs, or “water-pipes,” for centuries. However, the particular device known as the gravity bong appears to be a much more recent phenomenon.

An early reference to gravity bong appears in a 1996 online forum post asking, “Can someone tell me something about the ‘Gravity-Bong’????”. One response mentioned that a store-bought gravity bong was available at the time, suggesting both the term and device were known well before its 1996 online debut.

As a kind of water pipe, a gravity bong is said to harness gravity to “pull” smoke down into the chamber as someone lights a bowl filled with marijuana (which is located at the bottle’s opening) and lifts the bottle out of the water. However, gravity is technically a misnomer, as pressure changes make the pipe operational, not gravity. Despite the misnomer, use of the term, and device, likely spread in the 2000–10s due to the ease and cheapness of constructing the device.

A 20-minute short film called Gravity Bong came out in 2011, for instance, and the rapper Rittz mentions the term in his 2013 song “F**k Swag.” Several blogs and YouTube videos offer assembly tutorials, including Johnny Knoxville, in character as Tommy Balls from the 2012 movie Small Apartments. And, innovative tutorials for constructing a gravity bong out of a pumpkin at Halloween, or a swimming pool during college spring break, also helps give this term a new high.

And, of course, the increasing legalization of marijuana may have helped further popularize the term as people search for ways to use cannabis.

Perhaps, unsurprisingly, marijuana smokers are the primary users of the term. Based on social-media usage, the term seems to have particular currency among young and college-aged adults, especially males. Because the device is inexpensively assembled, the gravity bong is often associated with teenage potheads who can’t afford nicer bongs.

Among marijuana smokers, the gravity bong has a positive reputation for being cheap but creative and effective. It is sometimes referenced in speech and in writing as way to explain why someone is extremely high.

The gravity bong also goes by the slang terms G-B or geeb. And, sometimes the term waterfall bong is used, but even though it uses similar physics as the gravity bong, it is slightly different as it only has one container instead of two.