Everything After Z by Dictionary.com
Previous Word hall pass
Next Word hamster angle

What does ham mean?

Ham isn't just a staple for Christmas dinners or sandwiches. It can also stand for hard as a motherfucker.

To go ham is to put in an extraordinary, even aggressive, amount of effort. If you went crazy eating ham, you'd be going ham on some ham. 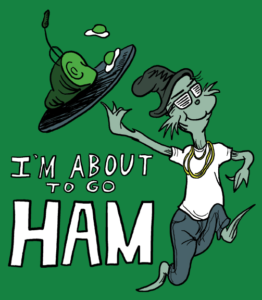 goinghamforgood.files.wordpress.com
I’m fixing to go ham in HomeGoods for fall decor 😍🍂💸
@swadd93, September, 2018
With David Gordon Green’s Halloween set to premiere at this weekend’s Toronto International Film Festival, Blumhouse has unleashed a brutal new trailer — and we do mean brutal. Unlike the first trailer, this sneak peek finds Michael Myers going H.A.M. across Haddonfield, Illinois, terrorizing trick or treaters as he moves like a walking nightmare from within the shadows.
Michael Roffman, Consequence of Sound, September, 2018
SEE MORE EXAMPLES

Where does ham come from?

Hard has been used in hip-hop with a couple related meanings since the 1980s. If you do something with intensity, you do it hard. Rappers have been bragging about rolling and hustling hard since the 1980s. A person can also be hard, meaning they’re “tough.” In 1988, for example, Sir Mix-a-Lot bragged about being “born in the ghetto, hard as metal.” Q-Tip released a song titled “Go Hard” in 1999. 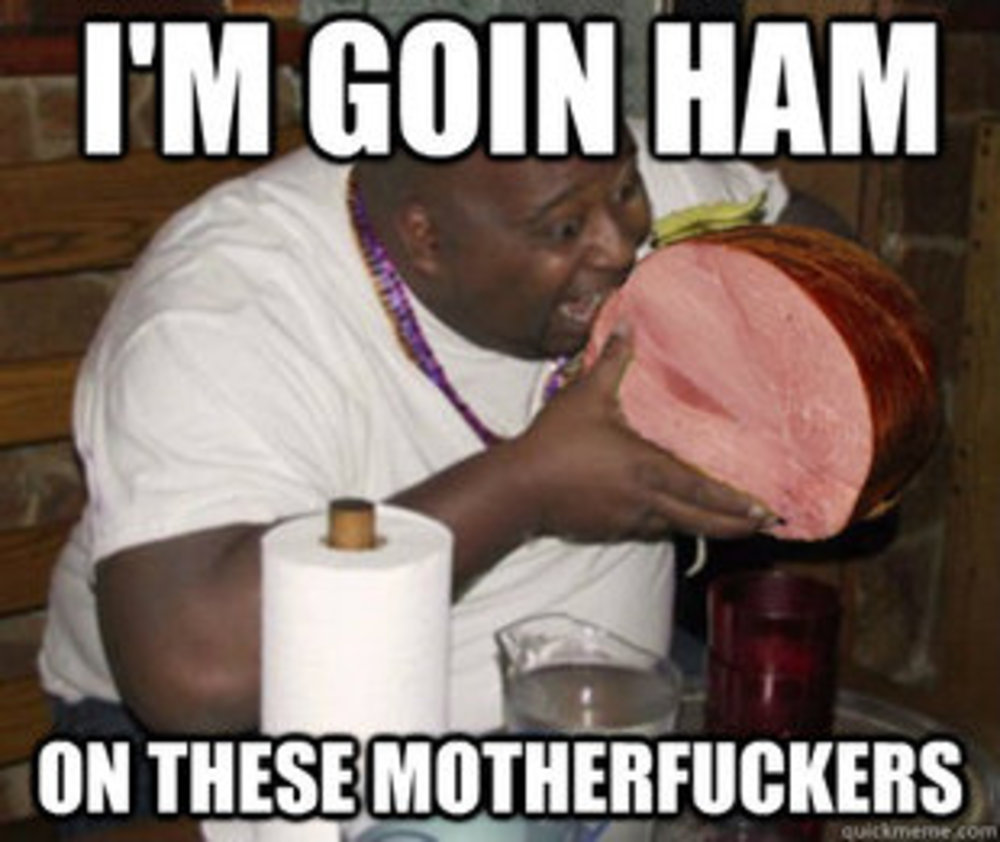 The acronym H.A.M. found widespread popularity in 2008. That January, Gucci Mane released “Go Ham on Em.” Later that year, Soulja Boy released his own song with the same title.

In 2011, Jay-Z and Kanye West teamed up on “H*A*M,” where they bragged about going harder than anyone else in the game. They also helpfully defined the acronym, rapping: “Let these niggas know who I am / I’m about to go H·A·M / Hard as a motherfucker.”

Going ham isn’t just for hip-hop stars anymore. Athletes, who also respect intensity and toughness, adopted ham. Deshaun Watson, an NFL quarterback, tweeted when he was in high school in 2012: “If I get a chance to play in a national championship game, Imma go ham.” In 2017, Watson did play in the NCAA national championship—and he did go ham.

If I get a chance to play in a national championship game, Imma go ham.

There’s also a sportswear brand named H.A.M. Even e-sports players can go ham. In 2015, a player of the game Heroes of the Storm was heard using the phrase on an ESPN2 broadcast. 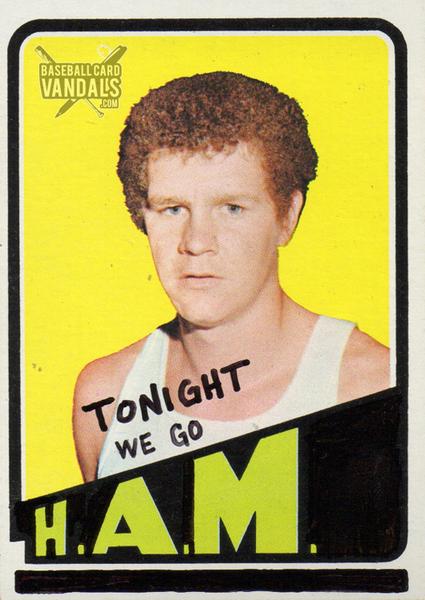 Of course, you can go ham at anything you want, like say, dancing.

Though the words ham stands in for may not be acceptable in polite society, ham itself isn’t considered offensive. In 2018, a Philadelphia news station used the term for a video of a pug and some pigs going ham on a pizza, showing just how mainstream the slang has come.

This is not meant to be a formal definition of ham like most terms we define on Dictionary.com, but is rather an informal word summary that hopefully touches upon the key aspects of the meaning and usage of ham that will help our users expand their word mastery.