keep calm and carry on

What does keep calm and carry on mean?

Commonly featured on posters, clothing, novelty items, and internet memes, keep calm and carry on is a popular slogan calling for persistence in the face of challenge. It was first used on a British propaganda poster during World War II but now enjoys general currency as an expression of resilience.

Where does keep calm and carry on come from? 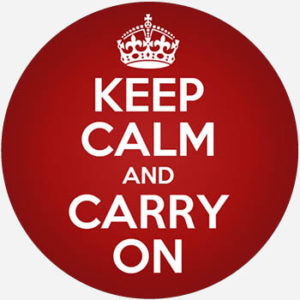 The basic verb phrase carry on means “to continue” doing something, but here, it specifically means “to persevere” and is often associated a British “stiff upper lip.”

According the UK’s official History of Government blog, the British Ministry of Information developed a series of three posters in 1939 to rally and reassure its populace as World War II ramped up. The third, and now iconic, poster flashed Keep Calm and Carry On in white, capital letters underneath an image of a crown on a bright, grabbingly red background. Who, exactly, coined the slogan is unclear. The other two posters featured equally comforting slogans: Your Courage, Your Cheerfulness, Your Resolution; Will Bring Us Victory and Freedom is in Peril; Defend it with all Your Might.

The British government printed nearly 2.5 million copies, reserving them to boost morale in case of a particularly bad German bombing. It never did display the posters, and most were recycled in 1940 during a wartime paper shortage.

The Keep Calm and Carry On poster languished in number and obscurity until Stuart Manley discovered a copy in 2000 tucked away in a box of old books for his bookshop, Barter Books, in Alnwick, England. His wife and co-owner, Mary, framed and displayed the poster. Patrons fell in love with it, and the booksellers printed tens of thousands of copies over the decade.

The poster skyrocketed in popularity after the 2008 recession, explained Foreign Affairs Correspondent Jon Henley in 2009 for The Guardian. Social psychologist Alain Samson observed for Henley that “[t]he words are also particularly positive, reassuring, in a period of uncertainty, anxiety, even perhaps of cynicism.”

Today, one can keep calm and do whatever it may be that gives one special pleasure, pride, or a sense of community and identity: Keep Calm and Knit On, Keep Calm and Watch Stars, Keep Calm and Go Buckeyes. And, thanks to enterprising designers, one can flaunt their preferred calm-keeping on everything from coffee mugs to cell phone cases to throw pillows.

Lookups for keep calm and carry on spiked in 2012, according to Google Trends. Early that year, the BBC’s Antiques Roadshow discovered 15 more originals of the rare wartime posters.

Examples of keep calm and carry on

“9:00 , Good night world ! Love you lots. Keep calm and carry on eating Oreo's! Remember do what your heart pleases, and choose positivity♡”
KimmyIsaac♡ @KimmyIsaacX Twitter (March 8, 2017)
“Like a voice out of history, [the poster] offers a very simple, warm-hearted message to inspire confidence in others during difficult times, and it’s something that should never fade from fashion: to keep calm and carry on.”
“The Story of Keep Calm and Carry On,” YouTube BarterBooksLtd (February 28, 2012)
“The power of Keep Calm and Carry On comes from a yearning for an actual or imaginary English patrician attitude of stiff upper lips and muddling through.”
Owen Hatherley, “Keep Calm and Carry On: The Sinister Message Behind the Slogan that Seduced the Nation,” The Guardian (January 8, 2016)
SEE MORE EXAMPLES

Who uses keep calm and carry on?

Broadly popular, keep calm and carry on and its many derivatives enjoys particular currency in memes and on products.

Thanks to its recent virality, keep calm and carry on now also enjoys general use in speech and writing, especially in social media posts or headlines, to indicate some state of affairs is moving along in spite of setbacks. Writers particularly favor the expression when commenting on British-based current affairs. For instance, one tweeter linked to a Financial Times article with “Keep calm and carry on—reasons for UK resilience since Brexit vote.”