What does lalaland mean?

Lalaland is a colloquial term for “being out of touch with reality,” usually due to bliss or ignorance.

As La La Land, it is a nickname for Los Angeles, California.

Where does lalaland come from? 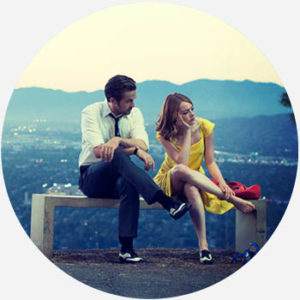 Lalaland emerges as a slang term in the 1960s. It apparently comes from la-la as an imitation for the sound of someone who’s “crazy,” and land imagines a fictional, far-off place one goes to in such a state.

We also see la la as nonsense words used to drown out a person saying something someone doesn’t want to hear, associated with the gesture of plugging the ears with the fingers, thereby blocking out reality. This la la may have influence lalaland.

La La Land started being used in the late 1970s and early 80s as a nickname for Los Angeles, California, specifically to refer to Hollywood.  It puns on the city’s common abbreviation as LA and comments on the cinematic illusions made by its film industry—as well as the enchantment of fame and the “out of touch” lives of its celebrities.

Paris, France was called Lalaland in the 1920s, based on the French-sounding exclamation of excitement ooh la la, but this earlier use appears to have little bearing on the later nickname for LA.

La La Land came into prominence with the 2016 award-winning musical romantic-comedy film La La Land.  It follows the romance of struggling artists Sebastian (Ryan Gosling) and Mia (Emma Stone) as they try to make it in Hollywood. The film’s pursuit of dreams, blissful romance, and LA setting inspired its title. It gained even more notoriety due to the 2017 Oscars snafu, where La La Land was announced as best picture when it was actually Moonlight. 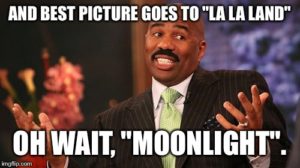 Wolverines rout the Aggies in La La Land
John McNeill, WKZO (headline), March, 2018
ok... my ol eyes are ready to retire... off to lalaland
@momsnetwork, June, 2008
What's it like in lalaland? No worries about reality, just make up crap to fit what you want to hear....must seem wonderful...until the day you can no longer pretend things are going your way. Your fantasies will only hold you for so long, then it's reality time. #MAGA
@hotUSAmom, April, 2018
SEE MORE EXAMPLES

Lalaland is colloquially used in speech and writing when someone is “out of it,” both literally and metaphorically.

It can characterize the likes of daydreaming (e.g. I zoned out in class, I was in lalaland.). It can describe drug-induced states of mind (e.g., He must be hopped up, because he’s in lalaland.). Lalaland sometimes refers to sleeping, especially dreaming.

The term frequently criticizes people who are seen as “out of touch,” especially targeting politicians who seem to lack awareness of their constituents’ needs (e.g., How could they support that tax bill? Are they in lalaland?). All these non-LA uses of lalaland are usually playful or mildly critical. 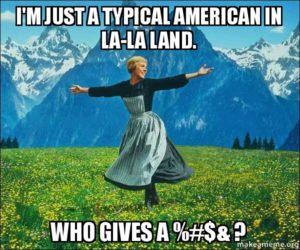 The nickname La La Land is still especially seen and heard for Los Angeles, especially Hollywood (e.g. I’m visiting the City of Angels, Lalaland, L.A.!). La La Land is a popular way to refer to LA in the news, particularly in LA-area press.

Apart from the 2016 film La La Land, numerous other popular media feature La La Land in their names, such an LA-based record company founded in 2002 and a 2008 Demi Lovato pop song. These uses tend to allude to the city of LA.

This is not meant to be a formal definition of lalaland like most terms we define on Dictionary.com, but is rather an informal word summary that hopefully touches upon the key aspects of the meaning and usage of lalaland that will help our users expand their word mastery.