What does laying pipe mean?

The expression laying pipe is a very visual euphemism for using one’s penis to “have vigorous sex with” another. Tl;dr: Pipe is slang for “penis.”

Where does laying pipe come from? 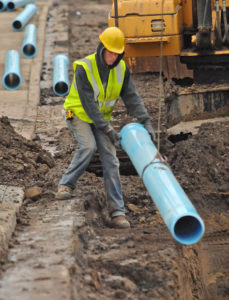 Pipe goes back to Old English and comes from, before it, a Latin root meant to imitate the sound of musical pipe.

In its early days, a pipe referred to a hollow cylinder, particularly one that carries water. By 1754, the expression laying pipe was used in the UK to describe the process of setting down pipes in the ground so that water could flow through them, as for sewage systems.

But humans are have dirty minds and see sex everywhere. As early as 1600, the word pipe was being used as a slang or a euphemism for a penis…because, well, pipes look like penises. 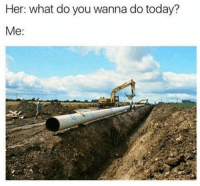 Whatever you do in bed (or wherever you get it on), enjoy it, regardless of whether it’s fucking, lovemaking, doing the dirty deed, laying pipe or making babies.
Brett Tanonaka, The Daily Californian, April 2015
So they're doing construction on my road and I asked what they were doing & the guy said "oh just laying some pipe" & I said "ayyyyyeeee" he just started laughing lmao
@marcuscoffey_, November 2017 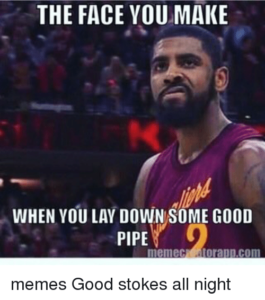 Occasionally laying pipe is modified with some, as in I was laying some pipe all night long. The expression may especially used of vigorous sex or sex with a large penis.

Men like to boast about their prowess in laying pipe (whatever, bro).

Laying pipe is also used to describe both straight and queer sex. 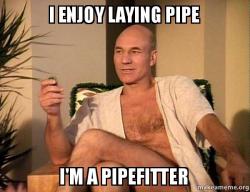 In the construction business, however, laying pipe is still used for literally installing pipe in the ground, as for water systems. It certainly elicits many an unoriginal joke on site, we imagine.

This is not meant to be a formal definition of laying pipe like most terms we define on Dictionary.com, but is rather an informal word summary that hopefully touches upon the key aspects of the meaning and usage of laying pipe that will help our users expand their word mastery.