What does lmgtfy mean?

Lmgtfy is an internet acronym standing for let me Google that for you, used when someone requests information that they could have easily found themselves.

Where does lmgtfy come from? 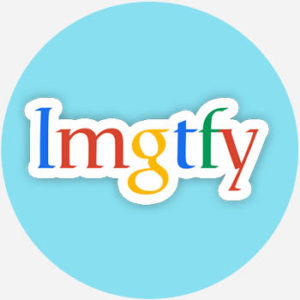 In the early 2000s, some computer programmers, engineers, and other more experienced internet users became increasingly annoyed at the flood of questions that newer users asked, especially about computer-related matters, that could be easily answered with a simple search engine query. And so let me Google that for you starting circulating as early as 2007, as a snarky way to make the point that you should not ask another person a question that you could easily find out from googling that question yourself.

In 2008, programmers Jim Garvin and Ryan McGeary had had enough. They created the site lmgtfy.com—possibly the first known use of the acronym—as a way to mock people who ask easily googleable questions. Here’s how it works: If someone asks a googleable question of, say, an IT professional, the IT worker would type in the search query on lmgtfy.com, and the site would provide a special link to share with whoever asked the question. When the asker clicks the link, lmgtfy.com displays a sarcastic how-to video, showing how to do a Google search of the exact question they had asked. The intention, if patronizing, is to deter people from asking people easy questions that they could have searched for themselves.

Since then, both the acronym lmgtfy and its full phrase, let me Google that for you, have entered into popular use, even when someone is not using lmgtfy.com. The immense popularity of lmgtfy has led to the creation of many similar sites, such as Let Me Bing That For You and Let Me Wikipedia That For You, though they don’t compete with Google’s dominance over the search engine market. The phrase peaked on Google Trends in 2011.

“When you think about it, catfish is really just lmgtfy as a tv show”
@josefmartian Twitter (March 24, 2017)
“This was meant to be a lmgtfy moment, but I haven’t had much luck with the old G this evening.”
Plug Nickel, “The Animal Kingdom is, in fact, the hottest park,” Chatter and Verse (June 9, 2011)
“Say you post a photo on Facebook of a really adorable St. Bernard puppy you're thinking of adding to your family. You'll probably get a lot of likes and comments saying, 'aww.' And maybe you'll get an interested friend who wants to know more about the particular breed of dog. She may ask something like, 'how much do St. Bernards eat?' This is the perfect type of question for LMGTFY because it's based on facts.”
Elise Moreau, “What Is LMGTFY and Why Should You Use It?” Lifewire (October 17, 2016)
SEE MORE EXAMPLES

Despite the seeming friendliness of the phrase, it’s important to understand that lmgtfy is always intended to be sarcastic and even condescending. The intended message of lmgtfy is to convey that the person asking the question is wasting another person’s time, because they are too entitled, lazy, or uninformed to look it up themselves.

Lmgtfy should only be used for questions based on facts, and not ones that require any subjectivity. For example, if someone asked “How many legs does a centipede have?” it could arguably warrant a lmgtfy. But if someone asked “What is the best type of lizard to have as a pet?” it would not call for lmgtfy, because there is no objective best lizard, and different people may have different opinions on the matter.

It’s worth noting that a person may simply say lmgtfy while actually providing the information asked for, instead of linking to lmgtfy.com. The intention here is that, even though the person is providing the answer, they want to make a point that the original person should look it up for themselves next time.

This is not meant to be a formal definition of lmgtfy like most terms we define on Dictionary.com, but is rather an informal word summary that hopefully touches upon the key aspects of the meaning and usage of lmgtfy that will help our users expand their word mastery.