Where does Mormon underwear come from?

Mormon underwear refers to a conservative type of underwear, considered sacred, worn at all times by members of the Church of Jesus Christ of Latter-day Saints (LDS), or the Mormon Church.

Where does Mormon underwear come from? 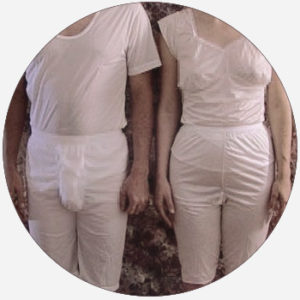 Mormon underwear, formally known as a temple garment, is a type of undergarment worn by Mormons. The undergarments resemble a white t-shirt tucked into long white shorts and are meant to be worn underneath one’s clothes at all times. Adult Mormons receive the temple garments in a special ceremony, a tradition that has been practiced since the 1840s. Mormons who wear these garments tend to have several pairs, which they wear instead of conventional underwear.

Using the phrase Mormon underwear to describe these temple garments goes back to at least 1918. The informal term was commonly understood by the 1930s. Because temple garments are considered sacred and not meant to be viewed by others, many non-Mormons have taken to mocking the garments by calling them magic underwear (since at least 1994), a perception spurred by the noted secrecy which surrounds many of the LDS Church’s practices.

As with many other unique traditions from the LDS church, Mormon underwear gained widespread attention in 2012 during the US presidential campaign of Republican Mitt Romney, a devout Mormon. When Romney wore white dress shirts, the outline of his sacred undershirt often became visible in photographs, prompting commentary, spoofs, and speculation. This led to a wave of media attention, and by October of that year, the website MormonSecret.com was launched by a former Mormon under the alias Ann Jackson, who sold Mormon underwear replicas to the general public.

Renewed attention has been directed at Mormon underwear after Romney announced he was running for the US Senate in Utah in February 2018.

I find it fascinating how curious non-Mormons are about Mormon underwear!
Joanna Brooks, The Washington Post, August 2011
Romney's got his Mormon underwear in a wad ever since 2012. That can be very painful
@kgarrison, January 2018
I'm not into Mormon underwear with it's [sic] secret sacred masonic symbols embroidered into it.
@ashelina365, October 2017
SEE MORE EXAMPLES

Referring to a Mormon temple garment as Mormon underwear and especially as magic underwear is considered offensive to members of the Mormon church, who believe these garments to be sacred. As the LDS tradition of wearing temple garments has become more well known to non-Mormons, the church itself has asked others to treat the tradition with respect, not mockery.

It’s worth noting that the design of temple garments makes certain clothing choices impractical: for example, strapless dresses and miniskirts—a fact that has garnered criticism from many groups against the LDS church for alleged sexism. During Mitt Romney’s campaign, it was noted that his wife, Ann Romney, wore skirts that were perceived by members of the church to be impossible to wear with temple garments.

References to Mormon underwear are one of the more common ways that people make fun of the Mormon religion and its members, particularly political figures like Mitt Romney and Orrin Hatch, a former Mormon bishop. It is used as a way to deride the more patriarchal, uptight, and conservative aspects of the LDS Church.

This is not meant to be a formal definition of Mormon underwear like most terms we define on Dictionary.com, but is rather an informal word summary that hopefully touches upon the key aspects of the meaning and usage of Mormon underwear that will help our users expand their word mastery.