Mufo is short for mutual follower, referring to someone you follow on social media who follows you back.

But, it is sometimes an alternative form of mofo, a softening of the vulgar slang motherfucker.

Where does mufo come from? 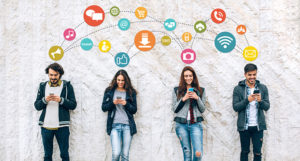 tried to tidy up Twitter and leave anyone who wasn't a mutual follower but Twitter doesn't seem to let me leave anyone!!!

Before the social media mufo went mainstream, mufo was sometimes used as shorthand for motherfucker or motherfucking. It’s still used that way sometimes online, similar to mofo, pronounced [moh-foh] and which dates back to the 1960s.

The expression mufo became more prevalent in 2016 on Twitter, perhaps in part to debates about the US presidential election that year that caused many people to unfollow social media friends.

lost my first (known) longtime-ish mufo today, so it begins. the great unfollowing

if I unfollowed u by accident I'm sorry! this happened to a mufo whomst I like a lot and I'm sorry if it happened to you!
@EfficacyOfGrace, January, 2019
"mufo" sounds like an insult, but then again it could be a subtle, passive-aggressive way to call out contacts who are doing something that annoys you.
@ScorpioDragon84, March, 2019
recent searches / How to Make someone you Follow a Mufo / How to get Mufo / Good politics mufo / what besides liking the tweet to get mufo
@EnsendadaSlime, February, 2019
SEE MORE EXAMPLES

The notion of mutual followers, AKA mufos, is found on social media, especially Twitter and Instagram. People have a lot of love for their mufos, and it can be considered rude to unfollow or mute them.

It is less common to see mufo as motherfucker with the new spread of mutual followers, but it still sees use.

When I look in the mirror I see one amazing ass mufo guy. #feelingood

MUFON, sometimes written MUFO, is the acronym for the Mutual UFO Network, a nonprofit organization dedicated to the search for intelligent extraterrestrial life.

Mufo is not to be confused with muufo, a traditional Somali flat bread.

This is not meant to be a formal definition of mufo like most terms we define on Dictionary.com, but is rather an informal word summary that hopefully touches upon the key aspects of the meaning and usage of mufo that will help our users expand their word mastery.