What does plumber's crack mean?

A plumber’s crack is the top of a person’s buttocks as seen when they bend over and their pants slide down.

Where does plumber’s crack come from? 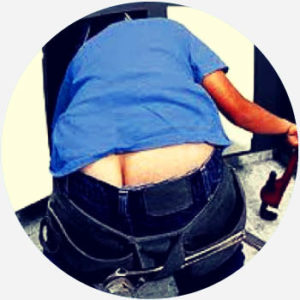 A stereotypical image of a plumber is of a heavyset man bent down beneath a sink with a tool belt around the waist. The position and belt tend to pull down the back of the pants, and if those pants are too tight, they can accidentally reveal the “crack” of the upper buttocks. This exposure has been called builder’s bum in the UK since 1988 and plumber’s crack in the US as early as 1992.

Some of the earliest instances of plumber’s crack, though, aren’t about plumbers but about the 1990s fashion trend of tight-fitting, low-rise pants, as a 1992 article in the Seattle Times says of a fashion show featuring “painted-on paints.” Plumber’s crack appears in Nicole Grey’s 1993 novel Daydream Believer, while plumber’s butt is referenced in a 1994 issue of Sports Illustrated, followed by plumber’s crack in Jim Humes’s 1995 snowboarding book Boarderlands.

Professional plumbers aren’t above the expression, however. In 1997, a plumbing company playfully marketed themselves in the Seattle Scroll with “No butt crack plumbers.”

Visual references to plumber’s cracks in cartoons, movies, TV, and other media largely spreads in the 1990s onward. Cartoons in particular popularized the trope of an overweight plumber bending over into the sink, inadvertently revealing his butt crack, usually to the visible discomfort of the protagonist.

Cover up that plumber crack lmao ...internet dog
@LilRent_, March, 2018
...There was a man at breakfast who had a bad case of plumber’s crack. I did not document it with a photo however. 😂🤣😂
@melmus99, March, 2018
By the way, a Web-based suspender company recently devised a strapping device that they claim will end plumber's crack forever. The device is being product-tested at this very moment. Early word has it that plumber's crack could soon be a thing of the past.
William Hodding Carter, Flushed: How the Plumber Saved Civilization, 2006
SEE MORE EXAMPLES

Plumber’s crack has been extended as an insulting noun phrase for a burly, slovenly, working-class man, often portrayed as socially ungracious or oblivious (e.g., I’m not going to talk to that plumber crack guy over there. Look at the stains on his shirt and how dirty his fingernails are.).

A more neutral term for plumber’s crack, which is generally comical or negative in connotation, is buttock cleavage, while a formal term is intergluteal cleft.

This is not meant to be a formal definition of plumber’s crack like most terms we define on Dictionary.com, but is rather an informal word summary that hopefully touches upon the key aspects of the meaning and usage of plumber’s crack that will help our users expand their word mastery.