What does rickrolling mean?

Rickrolling is when you troll someone on the internet by linking to the music video for Rick Astley’s 1987 hit song “Never Gonna Give You Up.” It is, by far, the most popular example of bait-and-switch linking.

Where does rickrolling come from? 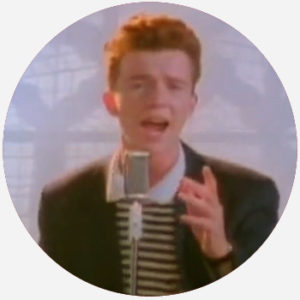 The practice of rickrolling started in 2007 on the image board 4chan. The first-ever rickroll involved a link promising to be a trailer for the game “Grand Theft Auto IV,” that instead directed excited gamers to the “Never Gonna Give You Up” music video.

The rick part of rickrolling comes from Astley’s first name, but where does the roll part come from? It turns out that also started on 4chan, according to Know Your Meme. In the mid-2000s, the then-director of the site, who is known as “moot,” decided to prank users by changing all instances of the word egg to duck. This, of course, changed the word eggroll to duckroll, which created such an amusing mental image that someone photoshopped wheels onto a picture of a duck. Suddenly 4chan users were posting bait-and-switch links that led people to a wheeled-duck image. The practice soon took on the name duckrolling.

Since 2007, rickrolling has taken on a life of its own. In 2008, Astley contributed to a live-action rickroll during the Macy’s Thanksgiving Day Parade when he emerged from inside a Cartoon Network float to sing his famous song. By 2011, rickrolling had become so mainstream that the White House’s official Twitter handle sent users to the video of “Never Gonna Give You Up” after a user complained that the correspondence briefing from that day wasn’t as entertaining as the one from the day before.

I JUST HEARD RICKROLL ON THE FRICKIBG [sic] RADIO I GOT RICKROLLED BY THE RADIO
@kanononononbean, January, 2007
Raised on a diet of rickrolls, Goatse, and other forms of cultural roughage, we no longer take pranks so personally, and we know that 'too far' and 'too soon' are a lot farther and sooner than they used to be. We also know it's fun.
Scott Brown, “Wired’s Guide to Hoaxes: How to Give—and Take—a Joke,” Wired, October, 2009
Rick Rolling is the internet phenomenon of the year so far and has sparked a massive resurgence of interest in the Newton-le-Willows crooner. The video has so far had more than a million hits and a website has even been set up in honour of the craze, yougotrickrolled.com.
"You've been tRicked,” Wigan Today, June, 2007
SEE MORE EXAMPLES

Rickrolling is also now used more generally to refer to someone quoting Astley’s famous song. A Vox article titled “Did Melania Trump include a Rickroll in the middle of her convention speech?”, which came out during the 2016 Republican National Convention, asks if she intentionally quoted “Never Gonna Give You Up” in her speech or if it was accidental. The line of her speech in question: “He will never, ever give up. And, most importantly, he will never, ever let you down.” A couple months later the New Yorker asks the same question in its article “Did Melania Trump Rickroll America?” and this time has Astley himself weigh in. His response: “Maybe.”

It seems that in order to rickroll, there has to be intent. Just saying the lyrics of “Never Gonna Give You Up” probably doesn’t actually count as rickrolling.

This is not meant to be a formal definition of rickrolling like most terms we define on Dictionary.com, but is rather an informal word summary that hopefully touches upon the key aspects of the meaning and usage of rickrolling that will help our users expand their word mastery.