What does riddle me this mean?

Riddle me this is a stock phrase used to introduce a riddle, joke, observation, or question.

Where does riddle me this come from? 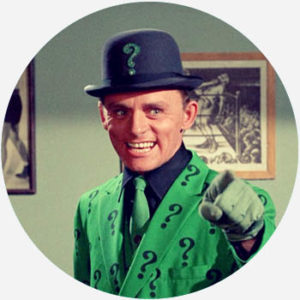 The phrase riddle me this appears as early as 1615 to present a small brainteaser. One notable early use comes in 1693 from English author John Dryden’s translation of an ancient Roman satire. In it, a speaker says, “Riddle me this, and guess him if you can, Who bears a nation in a single man?” (The Greeks, for what it’s worth.)

In 1924, the American Folklore Society recorded that “riddle me this, riddle me that, guess me this riddle and perhaps not” was used in Jamaica as a formulaic chant before riddles. By the mid-1900s, riddle me this was well established as a familiar stock phrase. A Broadway musical, Riddle Me This, was staged in 1933. A book of popular riddles was published under Riddle Me This in 1940.

In the 1960s Batman TV series, the villain The Riddler, played by Frank Gorshin, often prefaced riddles he would use to taunt Batman with the phrase riddle me this. In 1966, Gorshin released a novelty song in character reciting a number or riddles prefaced by his catchphrase. Actor Jim Carey memorably used “Riddle me this, riddle me that” when playing the villain in Joel Schumacher’s 1995 Batman Forever. Gorshin and Carey helped cement the phrase Riddle me this, Batman in the popular lexicon. For example, a 2009 Adweek article used the phrase to open an article considering whether a writers’ strike led to a proliferation of reality TV shows or vice versa.

Examples of riddle me this

riddle me this ... if I’m a pretty girl then why don’t i have pretty girl handwriting
@bratwrst, April, 2018
Riddle me this . A guy goes crazy. he loses his keys, his wallet, his phone, his gf. What did he lose first?
@SolomonKababu, April, 2018
Riddle me this: If you never see your boss take a vacation, how good are you going to feel about taking one? Probably not great–you wouldn’t be mirroring the example set by your manager to never take time off.
Amanda Zantal-Wiener, Fast Company, April, 2018
SEE MORE EXAMPLES

Who uses riddle me this?

In colloquial speech and writing, riddle me this is sometimes used rhetorically to question conventional wisdom, point to a perceived contradiction or hypocrisy, or make wry observations. An article in the railway trade journal The Signalman’s Journal, for example, used the phrase in questioning why government subsidies are readily accepted for airlines and trucking companies but not passenger rail service.

Riddle me this, Batman can be used in any of the contexts, owing to the phrase’s association with the Riddler. A 2011 book of philosophical essays related to Batman was titled Riddle Me This, Batman. Also, thanks and allusion to Batman’s Riddler, riddle me this is often paired with riddle me that for further expressive effect.

This is not meant to be a formal definition of riddle me this like most terms we define on Dictionary.com, but is rather an informal word summary that hopefully touches upon the key aspects of the meaning and usage of riddle me this that will help our users expand their word mastery.