What does ride the snake mean?

To ride the snake is to use powerful drugs or have a hallucinatory experience on them.

As a humorous colloquialism, ride the snake refers to engaging in risky behaviors likened to doing intense drugs.

Where does ride the snake come from? 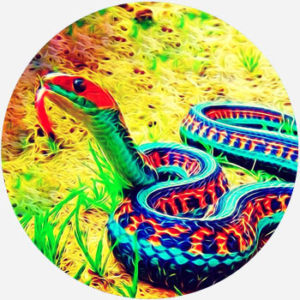 In the 1967 Doors song “The End,” Jim Morrison variously sings “ride the snake,” apparently a metaphor for tripping or a spiritual, drug-induced vision quest. His line was adapted into a poetic monologue in Oliver Stone’s 1991 movie The Doors. The line is spoken in a scene, overlaid with sections of “The End,” where Morrison takes hallucinogens in the desert with his bandmates.

In 1995, the punk band Lagwagon released a song titled “Ride the Snake,” with the opening line “Time to ride the snake, oh eyes gone dead and blank.” In an interview the following year, Lagwagon singer Joey Cape explained that the title was inspired by The Doors movie and he had used the phrase “riding the snake” to describe a heroin user with a vacant expression.

In 1996, Jim Carey appeared in a Saturday Night Live sketch as a diet guru who encourages his audience to use methamphetamine. Carey’s character punctuates his manic sales pitch by repeatedly saying “ride the snake.”

Examples of ride the snake

Drugs are fun. But sometimes I want to ride the snake for a couple of hours, and the damn snake wants to keep going for many more than I’d prefer
@SlimSinclair, April, 2018
But if I had a hankering for some semi-hot chicken, and I was dining with a group of folks who weren't necessarily up to ride the snake with me, they could just order one of those endless lettuce wedges while I indulge my urges.
Chris Chamberlain, Nashville Scene, January, 2016
Do yourself a favor and don't google the negative side effects. It veers very quickly into 'my grandma took Tamiflu, started seeing imaginary children, and now she's dead' territory. If you don't want to ride the snake, I'd say stick to the over the counter stuff. #SuperFlu18
@Tully, February, 2018
SEE MORE EXAMPLES

Who uses ride the snake?

Although Morrison’s meaning in “The End” is nebulous, Stone’s movie seems to have cemented the association between ride the snake, drug use, and their subsequent high.

By extension and in allusion to tripping on drugs when riding the snake, sometimes ride the snake is humorously used in colloquial speech and writing for other risky activities, such as eating spicy food or entering into tenuous political alliances.

This is not meant to be a formal definition of ride the snake like most terms we define on Dictionary.com, but is rather an informal word summary that hopefully touches upon the key aspects of the meaning and usage of ride the snake that will help our users expand their word mastery.