Sadfishing is the act of posting about your emotional problems online for attention or personal gain.

Where does sadfishing come from? 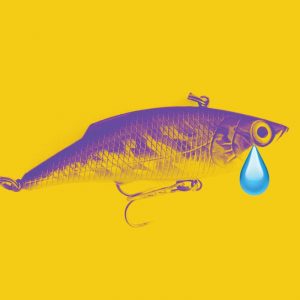 Sadfishing is based on catfishing, which is a slang term for the act of deceiving or swindling someone by assuming a false identity online.

Sadfishing was coined by writer Rebecca Reid in a January 2019 article for the UK newspaper, Metro. As Reid defined it in her article: “Sadfishing is when someone uses their emotional problems to hook an audience on the internet.” In other words: trying to get clicks and followers by posting about being sad.

And Thank God for Rebecca to saying it loud.
This ‘Sadfishing’ has become a business for making some extra money for attention grabber where genuine victims are being ignored.

Reid used sadfishing in reference to celebrity Kendall Jenner, who launched a marketing campaign with a skincare brand by teasing that she was going to reveal a very painful, personal struggle—with acne, it turned out. Many criticized the campaign as manipulative and insensitive.

While there are much bigger problems happening in the world, suffering from acne for me was debilitating. It’s something that I’ve dealt with since I was a young teen and has caused me to feel anxious, helpless and insecure. As humans, I don’t think we share our insecurities enough because we live in a time where being “perfect” is the standard. We curate our life online and pick the pretty moments to post. I’d like to show a younger generation that not everything is perfect. Being insecure about my acne gave me thick skin but I wouldn’t ever wish that feeling upon anyone so after trying countless options, I found something that has been helpful in maintaining clear skin for me. It’s been a long journey but I’m excited for where my skin is now. I didn’t think I’d see the day where I would feel confident posting a makeup free picture. My goal is to open up a dialogue around skin positivity. ❤️

The term sadfishing spread in 2019 as the phenomenon was discussed in the media. Interest the term spiked in fall 2019 after a report indicated young people were being wrongfully accused of sadfishing even though they were genuinely seeking support for their personal challenges.

Sadfishing: my male colleagues are laughing at my work related questions and make me feel bad about myself 😢
@yakiborg, December 2019
When someone solicits attention online by posting something emotional, it’s known as “sadfishing.” But some social media users can view emotional posts as just a way to get attention and miss the signs of serious distress.
Kristen Fischer, Healthline, October 2019

The term (and practice of) sadfishing is complicated. True to its origins, sadfishing is used to call out people, especially social media influencers, who are seen to be trying to profit off being vulnerable online.

“Sadfishing” is when influencers play up emotional troubles to boost likes. Teens who emulate the behavior attract predators and bullies. https://t.co/7tEY6rbljV

However, sadfishing has also come to be used to belittle people posting about their feelings online—regardless of true intent. This use of sadfishing is considered a form of cyberbullying, and can result in real problems being dismissed.

Sadfishing has become a toxic echo chamber in the adolescent world. Find out what defines the social media act of ‘sadfishing’ and what parents can do to prevent it: https://t.co/jttkKOTfyB via @parentsmagazine #parenting #teenlife pic.twitter.com/NHiNjB2VBA

While some people may post about their problems online for sympathy and attention, many other people post because they are seeking support and help. Because of the complexity of the matter, take heed when characterizing emotional posts online as sadfishing.

Don't get 'reeled' in☹️🎣
This #WakeUpWednesday we discuss 'Sadfishing'; the growing behavioural trend where exaggerated claims are made about emotions to generate sympathy & attention. Learn what it is and how parents & carers can help. Download here>> https://t.co/SHmlHx5GWA pic.twitter.com/xh8lJfWh6X

This is not meant to be a formal definition of sadfishing like most terms we define on Dictionary.com, but is rather an informal word summary that hopefully touches upon the key aspects of the meaning and usage of sadfishing that will help our users expand their word mastery.