What does savvy? mean?

The interrogative savvy?, popularized by Captain Jack Sparrow from the Pirates of the Caribbean franchise, is just a barnacle-y way to say “Got it?”

Where does savvy? come from? 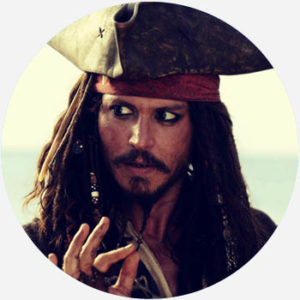 As with so many English words, savvy comes from Latin. Its verb sapere means “to be wise or knowing” (think homo sapiens), which yielded savez-vous (“do you know?”) in French and sabe in Spanish (“you know”), said to become savvy in West Indies pidgin language.

Though we may think of savvy? as pirate slang, we can thank the 1780s for savvy, a full half a century after the Golden Age of Piracy. Back then when English borrowed it, savvy was simply a noun that meant “knowledge” or “wisdom,” especially in the sense of practical (vs. theoretical) knowledge. We still use savvy as a noun in this way today:

Very interesting @pewresearch study: Americans – even those w/ high political awareness and digital savvy – have trouble distinguishing between fact and opinion news statements. And we are more likely to say something is factual when it coincides with our politics pic.twitter.com/GrKfwrI9fC

We get savvy as an adjective by the early 1800s. This is the use we’re more familiar with today, especially in phrases such as politically savvy or a savvy dresser. In these cases, savvy means more than just knowledgeable—it also means “crafty,” “quick,” “sharp.” Takes real skill and street smarts to be savvy.

You are V, a cyberpunk. In a world of cyberenhanced street warriors, tech-savvy netrunners and corporate life-hackers, today is your first step to becoming an urban legend. #Cyberpunk2077@maul_cosplay @maja_felicitas pic.twitter.com/PEF5FO6J4L

Hey guys, I’m not the most politically savvy guy, but let’s like maybe not take children from their parents and put them in cages. Just a thought.

Though we still often use savvy in these general ways, our association of savvy with pirates comes from the summer 2003 debut of the first Pirates of the Caribbean movie. In the film, main character Captain Jack Sparrow (Johnny Depp) uses the question Savvy? to punctuate threats, jokes, and other swashbuckling statements. This savvy calls back to its roots for “do you understand?” with the sharp bark of a “Do you hear what I’m saying?”

Fans of the franchise instantly took to the phrase, and the first Urban Dictionary entries for the term, written in quick succession in summer 2003, all reference the film as their inspiration. Not bad for what was apparently an ad lib from Depp.

Re: Harper Lee and Go Set a Watchman -- never publish my unfinished drafts. If you do this after I die, I will absolutely haunt you. Savvy?
@alwayscoffee, July, 2015
NBA, MLB, NFL take lead on innovation to improve interest, performance. The NBA is generally regarded as the most tech savvy major pro sports league, but others may be closing the gap.
Investors Digest, June, 2018
JOHNNY DEPP: I’m $40M in debt CAPTAIN JACK SPARROW: sounds like ur not very financially JOHNNY DEPP: don’t CAPTAIN JACK SPARROW: savvy
@KalvinMacleod, April, 2017
SEE MORE EXAMPLES

Outside of general uses of the word savvy in speech and writing, it’s rare to see a picture of a Captain Jack Sparrow Halloween costume or cosplay without savvy? somewhere in the caption.

Social-media users often use savvy? in the same way as Captain Jack Sparrow: to punctuate their more forceful opinions—even the non-pirate-related ones.

Here’s the thing though, ladies. Pronouns are subjective. So if you’re not in the “we,” I spoke of, the tweet wasn’t about you. Savvy? https://t.co/cVvOCSi9N7

And, we’re sure that Savannah “Savvy” Shields, the 2017 winner of the Miss America contest, occasionally gets asked Savvy?

This is not meant to be a formal definition of savvy? like most terms we define on Dictionary.com, but is rather an informal word summary that hopefully touches upon the key aspects of the meaning and usage of savvy? that will help our users expand their word mastery.