What does scene kid mean?

A scene kid is a young person who either took part in the scene subculture or who imitates such a style.

Where does scene kid come from? 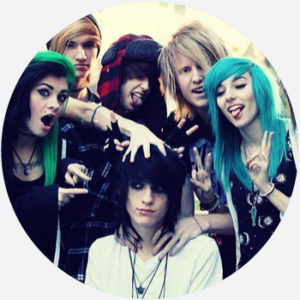 Early usages of scene kid predate the scene subculture and appeared in reference to music genres, raves, and other activities around the late 1990s. In this context, a scene is a kind of community. It’s the setting or milieu of a specific activity or group. The hardcore scene would refer to a group of people who enjoy the hardcore genre of music and who might discuss it with one another. A scene might also include the physical venues for such activities.

Scene kid likely became associated with the scene subculture in the mid-2000s, when the subculture began to flourish in the US. The subculture was mainly popular among teenagers, which is probably why scene kid stuck as a descriptor for scene enthusiasts. It’s possible that the band Hollywood Undead, who were enjoying success on MySpace at the time, may have helped make the term more popular. One of their early songs “The Kids” references the subculture. The song’s lyrics talk about how the singer was “accused of being a scene kid.” The singer also makes reference to scene kids at the beginning of the song, along with other references relevant to that time period.

As a subculture, scene was oriented around music and fashion. It existed concurrently with the emo subculture, which often prompted comparisons of the two, especially since there was an overlap of bands and sometimes fashion styles between the two groups. Some bands that were prominent in scene culture were Breathe Carolina, Blood on the Dance Floor, brokeNCYDE, Cobra Starship, 3OH!3, My Chemical Romance, and Panic! At the Disco. Scene’s music taste was eclectic, ranging from traditionally emo bands to bands that tended more toward pop. Scene’s fashion was all about bright colors, big, layered hair, flashy eyeliner, neon colored clothing, and lots of jelly bracelets. The internet was also important, as MySpace was big with scene kids. Altogether, if the style and culture had to be described in one phrase, it’d be “in your face.”

“Thankfully, my city lacks scene kids, but we make up for it with wanna be gangsters and poser skaters.”
inboundpaper Mmo-champion (December 9, 2011)
“As a former emo and scene kid, I felt at the time that scene was just a brighter, more Internet-orientated evolution of the former.”
Gina Tonic, “13 Things Scene Kids Wore In The Early 2000s, Because Scene Was Totally Not Emo — PHOTOS,” Bustle (March 27, 2016)
“And with that she plugs in her iPod to listen to some more of her scene kid music.”
“Finding Emos ...and goths, moshers and scene kids,” Yorkshire Evening Post (March 9, 2007)
SEE MORE EXAMPLES

The term scene kid was used both by members and outsiders of the scene subculture alike. When the word was used by non-scene kids, it was often accompanied with mockery. For scene kids who used it, this was just another self-identifier. The scene style has fallen out of use in the time since the mid-2000s, so it now mostly appears in retrospective pieces that are either written by former scene kids or aimed at them. It sometimes also appears in discussions about the rebirth of scene or about the rise of a new subculture like it.

This is not meant to be a formal definition of scene kid like most terms we define on Dictionary.com, but is rather an informal word summary that hopefully touches upon the key aspects of the meaning and usage of scene kid that will help our users expand their word mastery.