What does screw the pooch mean?

We recommend not being too literal with this one. To screw the pooch is to make a big or humiliating mistake. If you somehow screwed an actual pooch (dog), dear friend, then you seriously screwed the pooch somewhere along the way.

Where does screw the pooch come from? 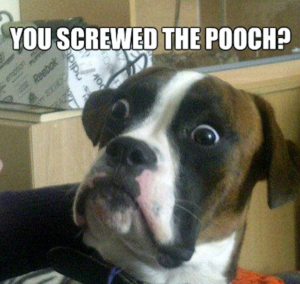 Screw the pooch is a more euphemistic version of the vulgar expression fuck the dog (and sell the pups). Fuck the dog, for its part, goes back to at least 1935 with an earlier, more polite version, feed the dog, dating to the 1910s and meaning “loaf around.” Dog, here, is meant to signal laziness. Fuck the dog took on the sense of “blunder” by the 1960s, possibly originating as World War II slang.

Screw the pooch was popularized by the 1979 book-turned-movie, The Right Stuff, by Tom Wolfe. Based on the Mercury Seven space program of the 1960s, the book and the film both depict characters repeatedly using screw the pooch–an effort to use actual NASA jargon and slang of the day.

Radio DJ Jack May (“Candied Yam Jackson”) has claimed that he is the one who turned fuck the dog into screw the pooch. According to May, he started using the phrase in the spring of 1950 after a friendly argument with his college roommate, John Rawlings, who worked with NASA to design prototypes for space suits for chimpanzees in test flights.

Examples of screw the pooch

Fully agree we can't look past anyone. One game at a time please! Let's not screw the pooch on this one!!
@UCFKnightsNatn, September 2018
Nobody can say for sure who was first to screw the pooch, but Urban Dictionary is most likely the culprit...In October 2013, the website defined “Scoobert” as “Scooby-Doo’s real f---ing name. I’m not kidding. Scoobert Doobert”...Urban Dictionary may have been the first to get Scooby’s name wrong, but it certainly wasn’t the last.
Anthony Smith, Mic, July 2017 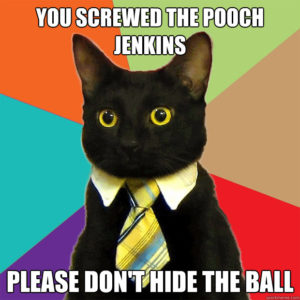 Who uses screw the pooch?

Especially since The Right Stuff, screw the pooch has become a popular way to describe all sorts of flubs, errors, and embarrassments. It’s colorful and expressive but avoids the profanity of “fucked up.” It can also be used in imperative forms, e.g., Screw the pooch and you’ll suffer the consequences.

This is not meant to be a formal definition of screw the pooch like most terms we define on Dictionary.com, but is rather an informal word summary that hopefully touches upon the key aspects of the meaning and usage of screw the pooch that will help our users expand their word mastery.