What does sickening mean?

Originating in and popularized by drag culture, sickening means “amazing,” “wonderful,” or “excellent.” It is especially used to compliment a drag queen as looking “extremely attractive” or “flawless.”

Where does sickening come from? 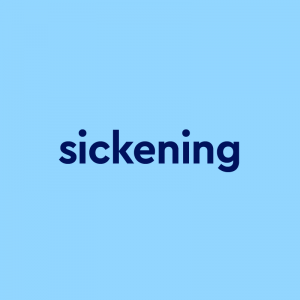 Like shade, slay, yaaas, tea, and many other terms, sickening has spread thanks to the popularity and influence of drag queens in the broader culture.

As shown by the 1991 documentary Paris is Burning, drag performers, especially Black and Latinx ones, have long had their own rich body of slang. Many of these terms, like slay, only recently crossed into the mainstream thanks in part to the hit, award-winning reality TV show, RuPaul’s Drag Race.

First airing in 2009 and hosted by drag idol RuPaul Andre Charles, RuPaul’s Drag Race follows drag queens as they compete to be crowned the best—or most sickening, if you will. In one memorable moment from the third season of the show in 2011, Shangela proudly described herself as sickening during an argument with fellow contestant Mimi Imfurst.

Sickening literally means “disgusting,” that is, something that makes you sick. So, how does a word for “gross” double as “great”? Sickening joins many other slang terms that invert a negative meaning into a positive one: bad, ill, wicked, and, well, sick itself can all mean “good.”

The specific sense of sickening implies that something (or someone) is so incredible that a person can’t handle it—it makes them metaphorically sick from how fantastic it is. Compared to some other drag slang terms that have spread in pop culture, sickening appears to be a relatively newer item, evidenced by at least the early 2010s.

While commonly used to compliment people, especially drag queens, sickening can also describe things, such as a stunning outfit or having a great day.

I didn’t know we were birthday buddies @kingsleyyy 💯🎉 I hope you have a SICKENING day MAWMA!!

Sickening remains used in the drag culture (and its intersections with the LGBTQ community) and associated with RuPaul’s Drag Race, whose queens helped popularize the term. One notable group that has adopted sickening are young female fans of K-pop on social media.

Cecily Tyson threw on a sickening dress, her best church wig and her baddest kitten heel and was ready to stunt!

she looks so good its sickening pic.twitter.com/xLIVBt87bj

This is not meant to be a formal definition of sickening like most terms we define on Dictionary.com, but is rather an informal word summary that hopefully touches upon the key aspects of the meaning and usage of sickening that will help our users expand their word mastery.