Everything After Z by Dictionary.com
Previous Word: skinny love
Next Word: skrrt

I love the #Olympics, but I must admit that it honestly was a skosh ruined for me starting as a teenager when I learned about how much of it is a giant hook-up event.
@CurtisHouck, February, 2018
We embrace our identity as ‘the Star of the North,’ or ‘L’Etoile du Nord.’ Alaska notwithstanding, we have the northernmost border, thanks to a notch that nudges into Canada just a skosh.
Kim Ode, Star Tribune, January, 2018
We’d sooner go for the Southwest vegetarian torta rolls ($6), heavy on mushrooms, onions and corn, with black beans. Like the Greek rolls, the filling could use a skosh more seasoning.
Griffin Swartzell, Colorado Springs Independent, March, 2017

Where does skosh come from? 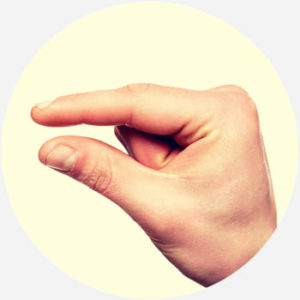 The popularization of the word skosh dates from the early 1950s, when American soldiers used it during the Korean War. They had adapted it from Japanese soldiers using the Japanese word for “a little”: sukoshi. GIs who heard sukoshi Americanized it as skosh.

The soldiers used the term to refer to a small amount of something or as modifier for something small (e.g., skosh wounds” meaning “minor wounds”). Soldiers also used skosh as an epithet for a short soldier.

When the Korean War ended, skosh spread throughout the United States as soldiers returned home. Since then, it has become a staple of casual English usage as a synonym for a “touch,” “jot,” or “smidgen.”

Skosh is a common word in modern English. In contemporary usage, skosh is a noun commonly used in the phrases “just a skosh” or “a skosh more/less.” The term is especially used in eating and cooking (e.g., a skosh of nutmeg or I’ll have a skosh more coffee.)

A popular high-end restaurant in York, England has borrowed Skosh as its name, nodding to the Japanese inspiration for its dishes as well as to their signature small size.