What does sloppy seconds mean?

Sloppy seconds also refers to dating someone after they’ve just broken up with someone in your immediate social group.

Where does sloppy seconds come from? 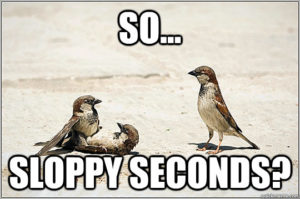 Dated to the 1960s, sloppy seconds stems from the idea that, if a man has sex with a women directly after she’s had intercourse with another man, the relevant orifice will contain bodily fluids from the previous partner, therefore making it sloppy. Seconds also evokes getting another plate of food at a meal. Since the 1970s, the expression has been gender-neutral; anyone can be another’s sloppy seconds.

Sloppy seconds found its way into a Fantastic Four comic book in 1964 and then again two years later in an issue of Daredevil. It’s unclear whether the editor of both issues, Stan Lee, understood the sexual definition of the term, as he used it to mean a superhero getting a swing at a villain after another superhero had already beaten them up. 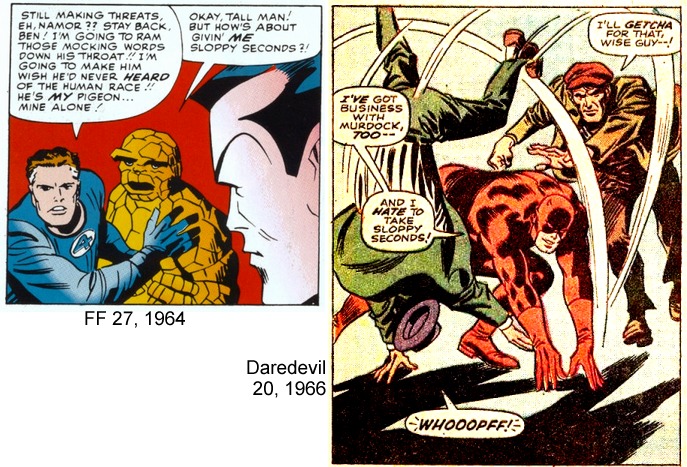 The term made its way to Hollywood in 1978’s Grease during an interaction between Danny (John Travolta) and his friend’s girlfriend Rizzo (Stockard Channing). In the scene, Danny compliments Rizzo on her appearance. Taking it as a sexual advance, Rizzo snidely tells Danny to “eat your heart out,” to which he fires back “sloppy seconds ain’t my style.”

In 1984 the term was adopted as the name of the Indianapolis band Sloppy Seconds. The punk group even hosted a music festival called Sloppy Palooza on a somewhat yearly basis. Don’t worry though, we won’t get into the fine details of what went down at the event.

Throwback Thursday. The very first Sloppy Palooza 1994. What a blast this night was! The skinheads wanted to kill us but we knew they really loved us hahah! #sloppyseconds #thequeers #trashbrats #jeffdahl #77punk #poppunk #glampunk #indianapolis #emersontheater

It’s not uncommon to see the term used as an insult when directed toward someone who might now be engaging in sexual activity with an ex-partner, implying that person is promiscuous.

Sloppy seconds It can also characterize any time a person repurposes something from an ex-partner for a new one, e.g., an engagement ring. That doesn’t feel very good, now does it?

This is not meant to be a formal definition of sloppy seconds like most terms we define on Dictionary.com, but is rather an informal word summary that hopefully touches upon the key aspects of the meaning and usage of sloppy seconds that will help our users expand their word mastery.