What does soft girl mean?

Soft girl is a fashion style, popular among some young women on social media, based on a deliberately cutesy, feminine look. It often features pink and yellow colors, floral and heart patterns, oversized sweaters and plaid skirts, and heavy blush makeup. Being a soft girl also may involve a tender, sweet, vulnerable personality.

Where does soft girl come from? 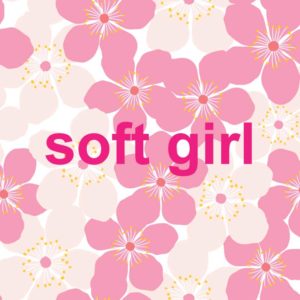 Soft girl is just one of several so-called “girl” types, such as egirls and VSCO girls, that spread on the social video-sharing app TikTok in the late 2010s. While egirls are known for a goth look and VSCO girls a 1990s vibe, the soft girl dons on a cuter, pinker, more sentimental aesthetic, all qualities meant to be summed up by the word soft.

this is giving me soft girl vibes, pls she looks so good in this aesthetic pic.twitter.com/iPrJ4YdFai

While we can find soft girl on social media describing various types of women or young women as “sweet” and “sensitive” in the 2010s (and earlier), the term soft girl, as associated with this particular look, appears to begin in 2018 online. Soft girl takes off in earnest in 2019, getting its first Urban Dictionary in April that year. It became a wider topic of conversation online in November and December.

Soft girl is likely influenced by a slightly older term: soft boy, sometimes written as softboi. This is a slang term for young man who adopts a gentle, Kpop-inspired, more stereotypically feminine style and manner. While soft boy is sometimes used kindly, it can also be used an insult, we should note.

But, being a soft girl isn’t just about looks. It’s also about expressing emotions, being sentimental or romantic, and embracing one’s tender, more gentle side—that is, being emotionally soft and vulnerable.

In December 2019, Adrienne Matei wrote a notable piece in the Guardian consider how the soft girl, while seemingly easy to dismiss as childish, may be a critique of power dynamics and a form of self-empowerment.

But if I got bangs, would it fit the e-girl or soft girl aesthetic?

@amazingdani2, December 2019
You will find the soft girl online, pigtailed, clad in pastels, perhaps with a spray of faux freckles—or little clouds, or hearts—painted across her blush-pinkened cheeks and highlighted nose.
Adrienne Matei, The Guardian, December 2019

Soft girl can describe a fashion style or be a term for a woman, usually young, who wears that look. Interestingly, soft girl, unlike VSCO girl, has not as been widely used as an insult or stereotype for young women.

Different kinds of makeup, accessories, and outfits may be described as soft girl. A lot of content online provides guides to achieving that perfect soft girl look.

Soft girl inspired the term soft szn, with szn an internet slang term for season, as in “time of year.” Soft szn sometimes involves videos where a person transforms from one style (e.g., egirl) to a softer, more sentimental look. Soft szn also involves someone looking or feeling very soft girl in general.

soft szn is here !!! my tik tok is just for funsies but pls follow it if u have tik tok it’d mean a lot (it’s catymh) pic.twitter.com/uti54swBpw

it’s soft girl hours. i love mob and hoodie so much.

Everytime I'm gonna tag @ShawnMendes in a post my heart beats faster when I read the cute "you both follow each other" thingy in the top of his name before tagging him, I really go: soft girl hours, forever thankful sjsnzn

The soft aesthetic isn’t limited by gender. There are soft boys and soft nonbinary individuals, too.

This is not meant to be a formal definition of soft girl like most terms we define on Dictionary.com, but is rather an informal word summary that hopefully touches upon the key aspects of the meaning and usage of soft girl that will help our users expand their word mastery.