What does spoopy mean?

Spoopy is an internet slang term used to describe something that is “spooky” but in a comical or cute way, such as a puppy in a ghost costume or a goofy Halloween video. It is based on a viral picture of a Halloween decoration that misspelled spooky as spoopy.

Where does spoopy come from? 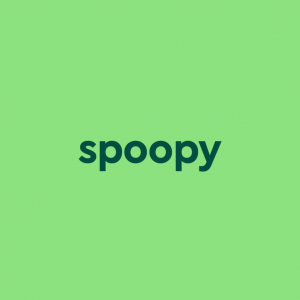 Spoopy first appeared online in 2009 in a picture posted by Flickr user clickfarmer. Taken at a Ross department store, the picture featured a Halloween decoration that misspelled spooky as spoopy.

While spoopy spread online somewhat in the early 2010s, it didn’t go viral as a meme until 2013. That’s when the Tumblr user sp00pyzorak3 posted clickfarmer’s spoopy picture next to a picture of a Halloween cookie cake decorated with its own memorable misspelling: “creppy” for creepy. 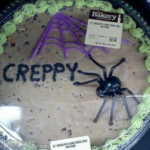 Screenshot from Know Your Meme

Since 2013, spoopy has been a popular term each year around Halloween, according to Google Trends. Its success is in part due to the misspelling itself, which suggests a combination of spooky and poopy. Spoopy also fits right into the an online culture of deliberate misspellings, purposely bad grammar, and cutesy words, such as in Doge memes and DoggoLingo.

Pulling up to your Halloween party like..... #SPOOPY
@SHARON_NEEDLES, October 17, 2019
What I thought was going to be a not so spoopy game had me scared for 90% of it.
@YerGirlSa, October 21, 2019
Spoopy can also be applied to modern movies, especially those that follow the trend of mixing comedy and horror genres.
Sangeeta Singh-Kurtz, Quartz, October 27, 2018
SEE MORE EXAMPLES

Online, spoopy is used as a funny, cute, or ironic way to refer to something as “spooky.” It can describe something that has a spooky (or Halloween-themed) element but is ultimately adorable, sweet, or even cheesy—a mix of the comedic and the scary.

Spoopy is often used to describe cute pictures of pets in Halloween costumes, and may appear in Halloween-themed Doge memes or DoggoLingo.

Spoopy is also popular in furry, cosplay, and anime communities online, who may use spoopy to characterize their various Halloween-themed content.

The adjective spoopy has inspired other wordplay, such as the superlative spoopiest, the noun and verb spoop, and formations like spooptacular. Along with creppy, doo (a deliberate misspelling of boo) may be used with spoopy.

This is not meant to be a formal definition of spoopy like most terms we define on Dictionary.com, but is rather an informal word summary that hopefully touches upon the key aspects of the meaning and usage of spoopy that will help our users expand their word mastery.