Feedback
the clap
the dress

What does the D mean?

Do you want the D? No, we don’t mean Dictionary.com, alas. The D is an affectionate nickname for the city of Detroit, Michigan. The D is also a slang euphemism for dick, or “penis” or “sex” more generally. But don’t worry, Detroit: Many people want the D!

Where does the D come from? 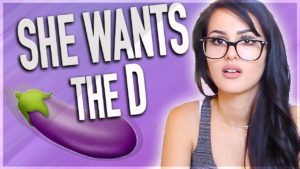 The city of Detroit has been proudly represented by the D since at least the early 1900s, when the city’s baseball team, the Detroit Tiger, emblazoned D, in a blackletter typeface, on their uniforms. The D became a rallying symbol for the city in following crippling race riots in the city the previous year. Detroit residents have gone on to hail their city as The (Big) D.

To others, the Big D may bring something very different to mind. In black slang, D has been a euphemistic slang shortening for dick, as in the penis, since at least 1994. (For this initialism, consider fuck being shortened to the F-word or calling someone a B, or bitch).

D typically appears as the D, frequently touted by men—and yes, also as longed for by their partners, especially women—as an object of desire and agent of satisfaction, as in She wants the D or I want the D. We can find this rapper Twista’s 2004 song “So Sexy”:

As Twista makes plain, the D can stand for “penis” itself, but more generally, it conveys wanting to have sex with the man.

Examples of the D

If she wears crocs to a party, don't give her the D.
@SheGonnaGetTheD, January 2013 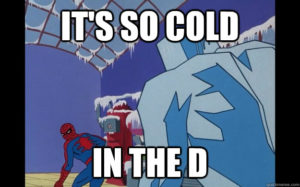 Quickmeme
Rich Rice is back to tell us everything happening around the D!...First, bring out your ugly Christmas sweater and head to Beacon Park Saturday, December 9th to set a new world record.
ClickOnDetroit, December 2017
When I'm in public with Ali and she really wants the D...
@_alphadonis, November 2018
SEE MORE EXAMPLES

Who uses the D?

The D is a familiar nickname for Detroit, appearing on everything from Detroit-proud clothing to local establishment names to website articles about goings-on in Motor City. In 2012, a casino in Las Vegas opened as The D promising “Detroit feel, Las Vegas appeal.”

Yo @ Detroit Twitter. I’m in the D. Let’s drink beer

The D, as slang for dick or sex more generally, is found heavily in black slang and hip-hop lyrics, whose influence on popular culture have helped the D spread into more mainstream use. It’s also a handy way around any censors against profane language, such as dick.

Very frequently, the D is a male boast about women desiring their member. And guess what? Women have sexual desire, too. Women (or men!) may genuinely reference the D in describing their passion for their partner–or, when they’re needing to get laid, as needing some D.

…I look 14 ain’t nobody callin me daddy unless they want the D, which I’m fine with

Athena: Why do I always get the D?!
Cay: WHOA!!! 😳😂#OnlyCaley pic.twitter.com/yRcZrvlVjS

This is not meant to be a formal definition of the D like most terms we define on Dictionary.com, but is rather an informal word summary that hopefully touches upon the key aspects of the meaning and usage of the D that will help our users expand their word mastery.

the clap
the dress
Home / Words / Slang / the D