What does thick girls mean?

The term thick girls is used for women who are considered especially attractive due to their voluptuous or curvaceous figures.

Where does thick girls come from? 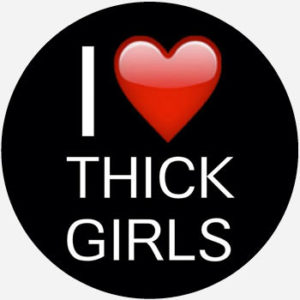 According to Green’s Dictionary of Slang, thick emerged as black slang, possibly on campuses or in the American South, describing a woman as physically attractive. It’s found in print by 1998 but, as slang, likely predates that time period when used in speech. The term appeared on Urban Dictionary as “not skinny, with meat on your bones” by 2002. Thick, here, alludes to a fuller body type the term’s users value as beautiful.

Thickness, a term and concept, is particularly used and celebrated in hip-hop culture. In 2014, for instance, rapper Drake claimed to be “obsessed with thick women” when featured on Nicki Minaj’s single “Only.” On his single “Just A Lil’ Thick (She Juicy),” rapper Trinidad James dedicated the song to “all my gorgeous, healthy sisters all around the world, I’m talking the 175 and up club. We cook good, we eat good, and we look good.”

There’s some debate over the difference between fat and thick. Generally, from the perspective of their users, fat is a negative descriptor while thick is positive. Fatness is associated with excessive skin, an enlarged stomach, and increased risk of health issues. Thick is used more exclusively to sexualize women, referring to full-figured breasts, bottoms, and thighs.

if skinny girls are made for modeling then thick girls are made for cuddling
@bleachgallon, February, 2018
In the South, we’re known for appreciating a ‘thick’ woman, and for a very long time, I was upset that I didn’t have the hips, ass, and breasts my people lift in praise.
Nichole Perkins, reprinted in The Huffington Post, November, 2014
we always want what we don’t have, thick girls wanna be skinny and skinny girls wanna be thick, short girls wanna be tall and tall girls wanna be short and etc. but just bc you don’t have exactly what YOU want doesn’t mean you aren’t beautiful in someone else’s eyes
@Ninamarie_571, February, 2018
SEE MORE EXAMPLES

Thick girls is a slang term used among male or gay female Black English speakers in speech and in digital communication. Given its use among massively popular hip-hop artists, thick is gaining increasing use as a broader, though still informal, term. Although less common, thick can be used to describe men, too.

For some, thick is used and seen as a body-positive term that embraces a body that falls outside of the unrealistic, often white, thinness promoted in Western commerce and media. For others, however, thick can still be offensive, interpreted as another way of objectifying and sexualizing women based purely on their bodies.

When used online and in text messages, the term is sometimes accompanied by the peach emoji, commonly used to represent butts, here thicker ones.

This is not meant to be a formal definition of thick girls like most terms we define on Dictionary.com, but is rather an informal word summary that hopefully touches upon the key aspects of the meaning and usage of thick girls that will help our users expand their word mastery.