What does Vote for Pedro mean?

Vote for Pedro is a reference to a campaign slogan in the 2004 cult-classic film Napoleon Dynamite. It is often used politically or nostalgically.

Where does Vote for Pedro come from? 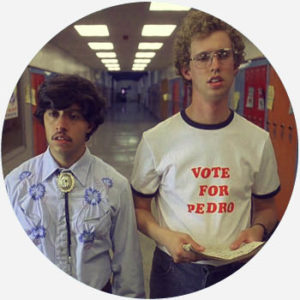 One of the many storylines in the film involves Pedro running for class president. Napoleon helps his campaign by making t-shirts and flyers that say “Vote for Pedro.”

In climax of the film, the candidates perform a “skit” before the entire school. With Pedro seemingly on the verge of losing, his loyal friend Napoleon (wearing a Vote for Pedro shirt) jumps onto the stage and does an elaborate dance routine, which earns a standing ovation and results in Pedro winning the vote.

Few could have predicted that the offbeat film would end up being a sensation, especially beloved by the millennial generation who were around Pedro’s age when the film was released. The phrase Vote for Pedro, and the dance that accompanied it, became a cultural touchstone that has earned many tributes and spoofs.

Based on the movie’s popularity, the phrase Vote for Pedro was commercialized in the form of millions of t-shirts, hats, buttons, coffee mugs, cell-phone cases, bumper stickers, and so on, which are still sold today.

Not too surprisingly, Google Trends shows that the use of the phrase Vote for Pedro tends to become more popular around US Presidential election cycles, perhaps due to increasing dissatisfaction with the two major political parties. In the 2016 election, “Pedro” was a popular write-in choice for protest votes, meaning people literally did vote for Pedro.

The phrase earned even more traction in the 2016 US Presidential election due to Donald Trump’s frequently racist and derogatory comments toward Latinx cultures. Memes began depicting Pedro and his campaign slogan, Vote for Pedro, in opposition to Trump.

Examples of Vote for Pedro

A kid at my school did the dance from napoleon dynamite for the talent show and the audience chanted vote for pedro and I loved it.
@npeezy_16, February 2018
Why isn't there a spot at the podium for a third party candidate? Literally ANY third party candidate? Is it too late to vote for pedro?
@TheNateRawlings, September 2016
So, if you were counting on ‘the youth vote’ to mobilize on Super Tuesday, I’d start making some alternate plans, because if the ‘youths’ do make it to the polls, they’ll probably all vote for ‘Pedro’ or something.”
Jason Linkins, HuffPost, March 2008
SEE MORE EXAMPLES

Who uses Vote for Pedro?

This is not meant to be a formal definition of Vote for Pedro like most terms we define on Dictionary.com, but is rather an informal word summary that hopefully touches upon the key aspects of the meaning and usage of Vote for Pedro that will help our users expand their word mastery.