What does VSCO dog mean?

VSCO dog is a humorous internet trend, especially found in TikTok videos, where people dress up their dogs to resemble stereotypical VSCO girls.

Where does VSCO dog come from? 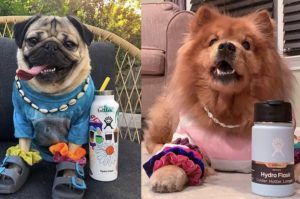 VSCO dog was inspired by the summer 2019 trend of the VSCO girl. A VSCO girl is a generally insulting term for a young, usually white woman who posts trendy pictures of herself edited on the app VSCO.

VSCO dog videos involve dressing up a pet dog in the manner of a stereotypical VSCO girl, such as scrunchies, shell necklaces, Hydro Flask water containers, and an overall beach-y, 1990s-style aesthetic.

VSCO dog videos started appearing on the social app TikTok in August 2019. One early VSCO Dog video was posted by TikTok user @puplolaa on August 13, and it depicts a Maltipoo named Lola wearing items associated with VSCO girls as its owner sings about VSCO girls:

More videos were uploaded, and the trend took off. By the end of September 2019, the hashtag #VSCOdog had over 1.5 million views on TikTok, with one of the most popular videos earning over 41,000 likes. VSCO dog videos also started appearing on YouTube by early September.

VSCO girls have NOTHING on my VSCO dog
@cosmicoblivion, September 2019
VSCO dogs are here, and they’re just barely putting up with it
Audra Schroeder, The Daily Dot (headline), September 2019

This is not meant to be a formal definition of VSCO dog like most terms we define on Dictionary.com, but is rather an informal word summary that hopefully touches upon the key aspects of the meaning and usage of VSCO dog that will help our users expand their word mastery.