What do egirl and eboy mean?

The terms egirls and eboys are slang terms for young women and men, respectively, who are active internet users, often stereotyped as emo-styled anime and gaming fans trying to get attention on social media.

Where does egirl and eboy come from? 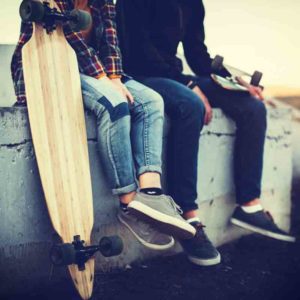 We can find a variety of one-off senses of egirl and eboy in the 1990-2000s, variously referring to types of young men and women online (E for “electronic”).

By the 2000-10s, egirls and eboys began more specifically characterizing young people online who are interested in an emo (E for short) or other alternative (e.g., goth, skater) aesthetic, especially involving dark clothing, hair, and makeup. They also were increasingly described as interested in gaming and anime, with their looks and behaviors judged as attention-seeking.

In early 2019, a meme spread on the video-sharing app TikTok, known as the E-girl Factory. In the meme, users record a parody video where they enter a “factory” that transforms (typically often emo/anime makeup and clothing) into a stereotypical egirl, i.e., a sort of goth-anime-gamer look.

Examples of egirl and eboy

i dont want an eboy i want myspace boy❤️
@yooniez, April 2019
Somewhere in that mix of teenage yearning for identity and the drive for likes, the egirl was born. And she’s cooler than you.
Lauren Strapagiel, BuzzFeed, February 2019 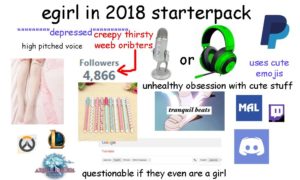 Who uses egirl and eboy?

Egirl and eboy can be (reclaimed) compliments or insults on social media. Both are closely associated with the TikTok “factory” memes.

As an insult, eboy/egirl implies such people are dressing in an emo way or who like anime for attention, not because they really like either subcultures. Similar terms are gamer girl and fuckboy.

As a compliment, eboy/egirl might accompany posts where people share pictures (often pretty, flirty, or otherwise self-flattering) of themselves sporting some kind of emo, goth, skater, Kpop, or anime look. They may be considered cool, clever, and ironic.

i can be your egirl 💞~ pic.twitter.com/1grjM4DUzJ

i found an eboy factory pic.twitter.com/GBrVEV3Ppt

Egirls and eboys are not to be confused with eBoy, a group founded in the late 1990s that makes pixel art, or E–girls, a Japanese girl group formed in the 2010s.

This is not meant to be a formal definition of egirl and eboy like most terms we define on Dictionary.com, but is rather an informal word summary that hopefully touches upon the key aspects of the meaning and usage of egirl and eboy that will help our users expand their word mastery.