What does otaku mean?

Borrowed from Japanese, otaku refers to a person who is obsessed with manga, anime, and other forms of Japanese or East Asian popular culture.

Where does otaku come from? 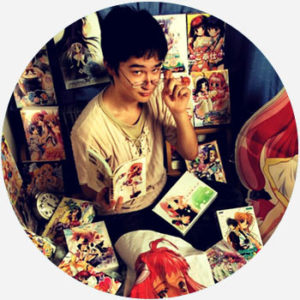 Otaku is a Japanese slang word roughly meaning “geek” or “nerd,” and though it has been imported into English-speaking cultures, it still maintains these Japanese connections.

Japan in 1970s and 1980s saw the rapid growth of both the manga and anime art forms—manga referring to Japanese comics, and anime to the animated equivalent—and the rise of a devoted following. These industries inspired rise to clubs, gatherings, and massive fan conventions. These fans started addressing each other as otaku, an honorific form of “you,” to convey their shared passion for anime and manga. Writer Nakamori Akio notoriously popularized the term in a 1983 magazine article sharply deriding the subculture, pushing the meaning of otaku towards the term “dork,” only much more insulting and forceful.

The term otaku took on yet more negativity after the hideous murders committed by Tsutomu Miyazaki in the late 1980s. Miyakzi was a serial killer who came to be known as the Otaku Murderer, due to his extensive collection of anime and manga. Some Japanese media connected his mental instability to his otaku tendencies, claiming that an excessive devotion to anime causes a person to lose touch with reality and become antisocial, if not sociopathic. The otaku subculture took a lot of heat for Miyazaki’s actions, and felt they were scapegoated and stereotyped as “creepy loners,” divorced from reality and unable to socialize with others—ironic, considering the very term otaku resulted from socialization.

In Japan today, the term otaku is widely considered to be a rude term, used to identify someone who is obsessed with something to a destructive, “abnormal” degree. In Japan, someone who watches anime would not be considered an otaku, but a person who, as it’s reported, has a body pillow depicting their favorite anime character would be.

As Japanese popular culture migrated to the United States and Europe, with legions of manga fans holding their own anime conventions in Western countries, the word otaku migrated with it, spreading in the early 2000s. It’s meaning and connotation has shifted, however. In Western cultures, otaku is far less derisive, more closely resembling its original use among anime and manga fans. It also broadened beyond Japanese anime and manga to refer to fans of other East Asian popular culture such as South Korean soap operas. Many American anime fans, for instance, proudly self-identify as otaku with pride, sporting T-shirts expressing themselves as such.

Still, the difference between the Japanese and Western use of otaku can cause confusion, which makes even some US anime fans uncomfortable with the term, particularly if it’s used by an outsider to anime and manga culture.

“Through this way, i would like to get to know people who are likeminded, have a passion for anime and are proud to be an otaku”
Elias Djlugia Otakucentral (March 17, 2017)
“It’s impossible to say exactly what portion of otaku are 2-D lovers, because the distinction between the two can be blurry. Like most otaku, the majority of 2-D lovers go to work, pay rent, hang out with friends (some are even married). Unlike most otaku, though, they have real romantic feelings for their toys.”
Lisa Katayama, “Love in 2-D,” The New York Times (July 21, 2009)
“Otaku gather as informal groups of friends, formal college clubs, on message boards, at game centers, and giant conventions.”
Rich Satsumaimo, “How I Learned to Stop Worrying and Love Being Otaku,” Tofugu (June 6, 2016)
SEE MORE EXAMPLES

The plural of otaku is generally otaku (following Japanese pluralization conventions), not otakus, though not all native English speakers follows this.

In the United States, otaku is a term more likely to be used by anime/manga fans to describe themselves, as opposed to Japan where it’s a term used to describe others who are deemed unhealthily obsessed or disturbed. Still, the English loan otaku can carry stereotypes of social ineptitude, painting a picture of an individual so obsessed with Japanese culture that they don’t know how to carry on regular human relationships.

On the other hand, many self-proclaimed otaku use the stereotype as inside joke amongst themselves, humorously describing themselves and their friend groups as otaku, as a way of both playing up and working against stereotypes. In this application, it becomes a knowing self-caricature, much like “fanboy” can be often be used more as a self-deprecating joke than as a real insult.

To fight back against the negative associations of otaku and otaku culture, many self-proclaimed otaku have made an effort to reclaim the word evidenced by such things as the name of Otakon, a yearly anime convention in Baltimore, or such fan websites as Otaku Central.

This is not meant to be a formal definition of otaku like most terms we define on Dictionary.com, but is rather an informal word summary that hopefully touches upon the key aspects of the meaning and usage of otaku that will help our users expand their word mastery.