A YouTube loop is the usually unintentional—and usually unhealthy, let’s be honest—experience of getting sucked into watching a lot of YouTube videos. 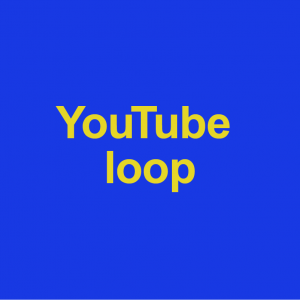 Although one has been able to set a YouTube video to replay (or loop) itself since January 2016, the phenomenon of getting caught in a YouTube loop has surely been around since the video platform was launched in February 2005. The phrase can be found on social media as early as 2008.

Here’s how it works. YouTube suggests content users may be interested based on what they have previously watched, and starting in 2010, it began autoplaying these videos. Watch one video of bizarre Japanese gameshow stunts or someone crafting, and then another, and then another—and boom, two hours have passed.

YouTube loops have gotten weirder when you consider videos can loop a single video for hours and hours. And yes, people have: you can listen to Darth Vader breathing on loop for 10 hours.

There is a 10hr youtube loop of Sideshow Bob stepping on rakes. We are watching it all day at work
@LOUDASiSMELL, July 26, 2020
We all know what it’s like to be stuck in a YouTube loop—you know, that moment when you meant to watch one video, but end up watching the entire back catalog of content related to whatever it is you came to see in the first place.
Natt Garun, The Next Web, June 2, 2015
I’m in a Bonnie Tyler YouTube loop. #INeedAHero #TFY
@AngryBlackLady, September 29, 2011
SEE MORE EXAMPLES

The phrase YouTube loop is usually used in a self-deprecating manner, with people talking about how they got sucked or caught into a YouTube loop watching amusing but ultimately pointless content, all after trying to complete a quick task online.

We might consider YouTube loop a perfect expression for the internet age: it’s issued in complaint over our own lack of productivity and yet serves as an acknowledgment that we just can’t help ourselves.

This is not meant to be a formal definition of YouTube loop like most terms we define on Dictionary.com, but is rather an informal word summary that hopefully touches upon the key aspects of the meaning and usage of YouTube loop that will help our users expand their word mastery.