What does co-responder mean?

The term co-responder refers to a non-law enforcement professional, such as a mental health worker, who responds alongside a police officer to the scene of an emergency or other situation that would traditionally be responded to solely by law enforcement.

In some cases, co-responder can refer to both (or all) members of such a cooperative unit—with both the police officer and the non-law enforcement professional being considered each other’s co-responder.

The idea behind co-responders is that many situations traditionally dealt with by police can be better handled by mental health professionals and behavioral health specialists, especially in cases involving people experiencing mental health problems or affected by substance abuse. Co-responders are trained to deescalate or help police deescalate situations that may otherwise result in arrest, hospitalization, violence, or self-harm.

The exact role, function, and use of co-responders varies widely. They may be embedded within police departments or may come from other agencies. They may travel to situations together or arrive separately.

In the US, the use and creation of co-responder programs has increased in recent years, often as a result of pressure to reduce arrests of—and police brutality against—people experiencing mental health problems (especially people of color). Many studies support their effectiveness in these areas.

Where does co-responder come from? 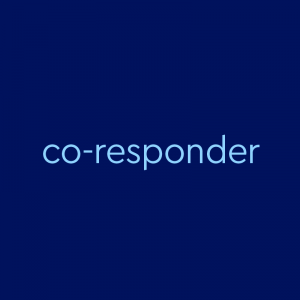 In the context of police and emergency personnel, the word responder simply refers to someone who “responds” to a location to deal with a situation that occurred or is occurring there. (It’s most commonly used in the term first responder, which refers to someone whose job is to be the first to respond to the scene of an emergency, especially a police officer, firefighter, or an emergency medical technician.) The prefix co- means “together” or “with”—co-responders respond together with police.

Prior to the 2010s, the term co-responder was often used to specifically refer to programs, policies, or teams involving firefighters working with medical professionals or police officers to handle emergencies. This usage was more common outside the US and is still used this way in the UK.

In the later 2010s, though, the term co-responder began to be used in the US in the context of cooperative efforts between police and health care professionals.

Our homeless outreach is improving with a new co-responder program that teams mental health professional with patrol officers. #SOTC2016

While many activists and police critics have called for an increase in co-responder programs, some have pushed to eliminate police involvement altogether in some situations (especially mental health crises), instead calling for responses by non-law enforcement professionals alone.

Rockford Police Chief Dan O’Shea said the “co-responder model” gives police an alternative to arresting someone experiencing a psychiatric episode or contemplating suicide.
@chicagotribune, October 18,2020
The co-responder model has been adopted in cities including Los Angeles and San Antonio, and advocates have pushed it for years as a way to reduce police interactions with people in crisis.
Anna Orso, The Philadelphia Inquirer, May 4, 2021

The term co-responder has increased in use in the US as more police departments have instituted such programs.

TOMORROW! Remember to tweet @PhillyMayor and let him know that you want funds allocated for ‘co-responders’ shifted entirely to mobile crisis response. Let him know we want caring mental health professionals completely separate from armed police for our loved ones in crisis.

This is not meant to be a formal definition of co-responder like most terms we define on Dictionary.com, but is rather an informal word summary that hopefully touches upon the key aspects of the meaning and usage of co-responder that will help our users expand their word mastery.