What does finger monkey mean?

Finger monkey is a common nickname for the pygmy marmoset, the smallest known species of monkey.

Where does finger monkey come from? 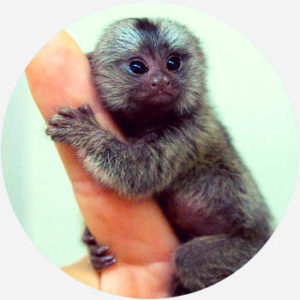 The pygmy marmoset (Callithrix pygmaea or Cebuella pygmaea) lives in the rainforests of South America, spanning parts of Brazil, Bolivia, Columbia, Ecuador, and Peru. They are active during the day and primarily eat, in addition to insects, gum, sap, resin, and other products exuded from trees.

The average length of a pygmy marmoset is about 13 centimeters, or just over five inches—and it’s this adorably small size that gives the finger monkey its popularity and nickname. Photographs of baby pygmy marmosets clinging to fingers helped cement the term finger monkey.

Finger monkeys are popular in the controversial exotic pet trade. Though the finger monkey isn’t endangered, the international pet trade may be a threat to the species. Some also feel that it is cruel to remove a non-domesticated animal like the pygmy marmoset from its natural habitat and its family, particularly at a young age. Ownership of monkeys is also illegal in some US states.

“This finger monkey belongs w/his mama and family in the jungle far from ppl!”
Lilyana Srnoguy @YouWant2Change Twitter (April 30, 2017)
“a couple with three young girls buying items to 'make slime' had a baby monkey with them and I think I've reached my peak, this is the greatest height my career as a target employee will come to and it'll only go down from here. I've never pet a baby finger monkey in my life.”
beast-boo Tumblr (May 18, 2017)
“Diddy Kong is one popular finger monkey from Miami, Florida, who loves baths, eating burritos and playing with his best playmate Yeti Kong, a Hybrid Marmoset.”
Newsday.com Staff, “Pets you should be following on social media,” Newsday (May 9, 2017)
SEE MORE EXAMPLES

Due to their size, finger monkeys are also known as pocket monkeys or thumb monkeys. When called finger monkeys rather than pygmy marmosets, the animals are usually being referred to in the context of pets or the pet trade.

This is not meant to be a formal definition of finger monkey like most terms we define on Dictionary.com, but is rather an informal word summary that hopefully touches upon the key aspects of the meaning and usage of finger monkey that will help our users expand their word mastery.