What is excited delirium?

Excited delirium is a term for a condition that’s said to result in a person exhibiting extremely agitated and aggressive behavior, often in relation to drug use or mental illness. However, there is not broad consensus about the definition of excited delirium, and it has not been universally accepted as a genuine medical condition. Still, it is used by some emergency medical practitioners and medical examiners, who sometimes list it as an official cause of death.

Many civil rights advocates and medical professionals strongly object to the use of the term, with some rejecting it as unscientific. The term has been specifically criticized as being used by police to excuse the use of excessive force during arrests. Because many of these cases involve the arrest of Black people, critics have cited it as an example of systemic racism.

In 2021, excited delirium—and the debate surrounding it—gained wider attention when the term was prominently mentioned in the criminal trial of former police officer Derek Chauvin for the murder of George Floyd, whose killing sparked international protests against racism and police brutality.

Where does excited delirium come from? 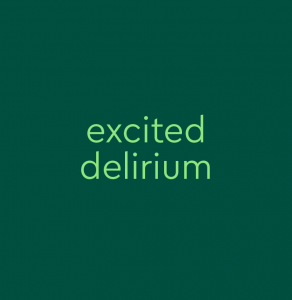 Delirium is an officially recognized medical condition in which a person temporarily experiences mental confusion, sometimes paired with panic, hallucinations, and violent or manic behavior. In the context of medical terminology, the word excited is generally used (but in a way that’s much narrower than its common use) to describe patients who display violent, panicked, or out-of-control behavior. The phrase excited delirium is typically used in cases when a person is engaging in especially violent or out-of-control behavior due to an altered mental state, such as from drugs or brain injury.

One of the first uses of the term excited delirium in reference to a distinct condition comes from a 1985 medical journal article by CV Wetli and DA Fishbain, titled Cocaine-Induced Psychosis and Sudden Death in Recreational Cocaine Users. In the article, excited delirium is described in part as consisting of “the acute onset of an intense paranoia, followed by bizarre and violent behavior.” Symptoms of excited delirium listed in this and other studies include hyperthermia (abnormally high body temperature), unexpected physical strength, aggressive behavior and violence, paranoia, and panic. Excited delirium is almost always associated with cases involving mental illness, use of drugs (especially cocaine and methamphetamines), or both.

In the decades since the term was introduced in medical literature, excited delirium has been the subject of many studies, but many of them have been inconclusive about the nature of excited delirium and how or whether it can be considered a cause of death. There is currently no medical consensus about how excited delirium might cause death independent of other factors.

Central to the debate around the term is the fact people exhibiting the kind of erratic and violent behavior associated with excited delirium frequently come into contact with and are restrained by police and emergency medical personnel. Studies have shown a statistically significant rate of cases in which excited delirium has been listed as a cause of death for Black men who die after being restrained by police. Critics argue that the term excited delirium is often used by officials to mask the fact that a person’s injury or death was caused by excessive force by police.

While the term excited delirium has long been controversial, it became the subject of widespread attention in 2021 during the criminal trial of Derek Chauvin. Chauvin was charged with the murder of George Floyd after video footage showed Chauvin kneeling on Floyd’s neck for several minutes during an arrest.

Chauvin’s defense team argued that Chauvin’s actions were necessary to detain Floyd, who they claimed was displaying excited delirium. In video footage of the incident, another police officer can be heard explicitly using the term and expressing concern about it. The trial also included testimony about how police officers are trained to handle a suspect who is thought to be displaying signs of excited delirium.

Use of the term in such a closely followed criminal trial led to further discussion and debate about it and its relation to the issues of police brutality and systemic racism.

I cringe when I hear the words "excited delirium".That defense was used here in Spokane, Washington to justify the excessive force used on Otto Zehm who died at the hands of the Spokane police departments in 2006. The cop's got away with murdering Otto Zehm.

Today on the stand, Dr. Langenfeld, who tried to resuscitate Mr. Floyd in the emergency room and pronounced him dead, said he had considered but ultimately rejected excited delirium as a contributing factor in his death, conceding that it was a “controversial diagnosis.” NYT

Excited delirium is used in official ways by police officials, medical examiners, and emergency medical practitioners. Many major medical organizations do not recognize it as a medical diagnosis, making its use controversial. It’s often criticized as being a way for police to justify excessive force.

Morning All. In the #GeorgeFloyd case, keep your eye on the fact that the police put the term “excited delirium” in the arrest paperwork for Chauvin. I worked a high-profile excited delirium case a decade ago (“DC 9” case). I suspect we’ll be hearing more about excited delirium.

We should reopen every case where someone died in police custody and the state said they died of “excited delirium.” #JusticeForManuelEllis

What other words are related to excited delirium?

This is not meant to be a formal definition of excited delirium like most terms we define on Dictionary.com, but is rather an informal word summary that hopefully touches upon the key aspects of the meaning and usage of excited delirium that will help our users expand their word mastery.