What does ischial tuberosity mean?

Ischial tuberosity is the name for the part of the pelvis that supports a person while sitting.

Where does ischial tuberosity come from? 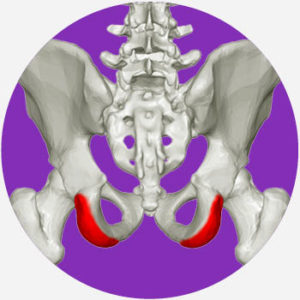 Ischial tuberosity is an anatomical term for the V-shaped bone at the bottom of the pelvis that makes contact with a surface when a person is sitting down, hence their common name of sit bone or sitting bones.

Forming one of the main parts of the pelvis, the ischial tuberosity is the attachment site for a series of ligaments and muscles, notably the hamstrings, which support the body while sitting. It is located directly beneath the ischial spine (the very bottom of your spine near the hip bones) and, when standing, is covered by the gluteus maximus (the butt muscles).

Emerging in the 1800s, ischial is the adjective form for ischium, a 17th-century anatomical term generally used for the “bones on which the body rests when sitting.” Tuberosity indicates a slight ridge or roundness on the surface of the bone—think protuberance—where muscles attach. Also appearing in the 17th century, tuberosity comes from the Latin base, tuber, literally meaning “bump” or “swelling.”

schial tuberosity is typically due to an inflammation of the surrounding muscles. The cause of this pain usually stems from repetitive movements or positions, such as sitting for too long or from overextending muscles through excessive exercise.

The Western yoga community commonly calls ischial tuberosity pain “yoga butt.” Yoga involves many forward bends, which can overextend the hamstrings and lead to strains around the ischial tuberosity, a concern among very flexible yoga practitioners. Remedies include rest and the immediate halt of any activities. Severe pain, of course, should always be diagnosed by a certified physician.

CHAIR FACTS: When sitting in a chair, the weight is frequently placed upon the ischial tuberosity. These are also called the 'sit bones.'
@Emm_Initiative, December, 2017
As people age, the #hamstring can be injured where it inserts into the ischial tuberosity in the pelvis and cause groin or hip symptoms.
@HamstringRehab, April, 2018
If you place your hands behind your knee, you can feel the hamstring attachments as firm, bone-like tendons — one on the outside and two on the inside of the knee. On the other end, the hamstrings also attach to the ischial tuberosity (sitting bones) of the pelvis.
Eva Norlyk Smith, HuffPost, December, 2017
SEE MORE EXAMPLES

In colloquial contexts, as noted, people refer to the ischial tuberosity as the sit bone(s), especially when speaking to little kids, as in “Sit down on your sit bones, please.”

This is not meant to be a formal definition of ischial tuberosity like most terms we define on Dictionary.com, but is rather an informal word summary that hopefully touches upon the key aspects of the meaning and usage of ischial tuberosity that will help our users expand their word mastery.