What does plantar flexion mean?

Plantar flexion refers to the movement of the foot when it is bent at the ankle away from the body, accomplished by flexing muscles in the calf, ankle, and foot.

Where does plantar flexion come from? 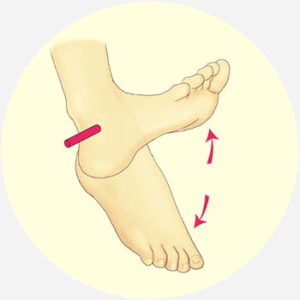 Plantar flexion is derived from the Latin planta, “sole”, and flectere, “to bend.” Early modern scientists often coined new kinesiological terms by combining the Latin names for body parts with its directionality. Plantar flexion describes foot movement contracting muscles in the sole of the foot while its opposite motion, dorsal flexion or dorsiflexion, describes movement toward the upper side or back.

While plantar is recorded in the early 1700 and flexion before it in the early 1600s, the particular phrase plantar flexion isn’t evidenced until at least 19th-century anatomical texts to describe one of several possible ankle movements. In contemporary anatomy and medicine, plantar flexion remains a technical term for the downward-pointing of the foot. The term can be found on popular internet medical resources such as WebMd and Healthline.

Plantar flexion is a natural movement of which healthy feet are capable, and any pain or interruption due to plantar flexion may indicate a medical problem. Examples of plantar flexion include standing on tiptoes, depressing a pedal in a car, or going en pointe while dancing ballet. Plantar flexion also occurs during everyday actions like walking, running, and stretching—anything that requires the foot to flex out and down.

Anthony Davis injury: MOI is plantarflexion & inversion most likely spraining his anterior talofibular ligament "ankle sprain".
@ReiffReport, March, 2018
[Physical therapist Mandy] Blackmon recommends that dancers stretch their calves as well as pushing their pointe. Having a good range of motion in dorsiflexion (flex) and plantar flexion (pointe) is key to keeping your feet and ankles healthy, and tight calves can restrict movement in your ankle joint.
Candice Thompson, Dance Magazine, August, 2017
The exosuit counteracts [limited foot clearance] by retracting the cable attached to the shoe’s tongue, applying a small amount of force to bring the toes up. When the wearer needs to take a step forward, the rear cable contracts to ensure that their foot pushes off the ground, a movement called plantar flexion.
Andrew Thurston, BU Today, February, 2018
SEE MORE EXAMPLES

As a technical term, plantar flexion is generally used by health professionals, scientists, and dance educators familiar with anatomy. It is considered a more official and specific term than its vaguer colloquial counterparts, such as “pointing” or “flexing” the foot.

Plantar flexion is often mentioned in connection to foot- or ankle-related injuries, including plantar fasciitis, sprained ankles, or pronation.

This is not meant to be a formal definition of plantar flexion like most terms we define on Dictionary.com, but is rather an informal word summary that hopefully touches upon the key aspects of the meaning and usage of plantar flexion that will help our users expand their word mastery.