R32 has been used as a model designation for several notable motor vehicles, including a BMW motorcycle, a generation of the Nissan Skyline car, and a sub-model of the Volkswagen Golf.

Where does R32 come from? 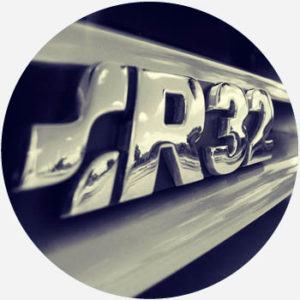 In 1981, Nissan designated the newest generation of its Skyline model the R30. The R31 generation followed in 1986 and the R32 in 1989. That generation saw the introduction of the high-performance Skyline GT-R. The R32 Skyline GT-R developed a cult following and was featured in the video-game series Gran Turismo in the late 1990s. The subsequent R33 and R34 generation Skyline GT-Rs were featured in the Fast and the Furious movie series.

The Skyline GT-R could not initially be imported to the US from Japan due to different safety standards. However, because of an exemption for vehicles over 25 years old, the R32 (but not R33 or R34) generations were cleared for import beginning in 2014. This led to renewed interest in the R32 GT-R in the US.

Volkswagen announced a performance variant of its popular Golf hatchback, known as the Golf R32 in 2002. Volkswagen produced the Golf R32, featuring a 3.2-liter engine, until 2009. The R used in the car’s badges resembled the R in the logo of Volkswagen’s racing division. The Golf R32 appeared in 2006’s The Fast and the Furious: Tokyo Drift.

At $8,750, could this 2004 VW R32 be your Golf with balls?
@Jalopnik, April, 2018
Our latest @BurnoutBros video is now live, head over to our page to check out our awesome GTR meet we attended in my R32 GTR! #Youtube #BurnoutBros
@JakeHillDriver, April, 2018
The innovative nature of the early German motorcycles was striking both in mechanical ingenuity and artistic design. BMW’s flat-Twin and shaft drive was well represented by Evan Bell’s 1923 R32, whose serial number suggests it was only the 41st motorcycle produced by BMW.
Bob Stokstad, Cycle World, September, 2012
SEE MORE EXAMPLES

R32 is most frequently used by car and motorcycle enthusiasts. R32 may be used alone, with manufacturer or model name implied by context, to refer to the Volkswagen or Nissan R32.

R32 was used internally by Nissan, but the car was marketed to the public as the Skyline GT-R. Nevertheless, the R32 nomenclature was adopted by fans of the model.

This is not meant to be a formal definition of R32 like most terms we define on Dictionary.com, but is rather an informal word summary that hopefully touches upon the key aspects of the meaning and usage of R32 that will help our users expand their word mastery.