Trypophobia involves an intense feeling of discomfort or revulsion in response to seeing a clustered patterns of holes or bumps.

Where does trypophobia come from? 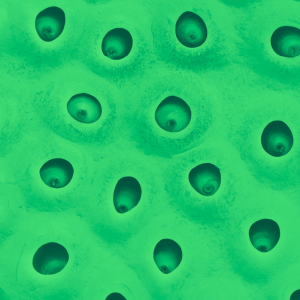 Trypophobia dates back to the early 2000s.

An internet user known as Louise claimed to have coined trypophobia in 2005. On a GeoCities now-defunct page dedicated to “all of us weirdoes who have an irrational fear of HOLES,” Louise stated she settled on trypophobia as a name for this fear. The word is based on the Greek trŷpa, meaning “hole,” and the combining form –phobia, meaning “fear.” The word is modeled on other phobias (e.g., arachnophobia, claustrophobia). n.

Interest in the term on Google Trends took off in 2011 with popular media coverage of the topic. In 2016, trypophobia made headlines when celebrity Kendall Jenner said she suffers from it.

Trypophobia is not currently considered a mental disorder by the American Psychiatric Association’s Diagnostic and Statistical Manual of Mental Disorders. This is because it has not been found to cause fear that impairs or prevents a person from living their everyday life. But there has been growing awareness around the term, with many people in online communities identifying as having such aversions.

Researchers have proposed different theories about why such reactions might happen. Some trace it to natural fear of dangerous animals whose appearance includes things like clusters of bumps or patterns of small circles.

Trypophobia-inducing images tend to include small, high-contrast patterns, which might recall the patterns of dangerous animals and disease symptoms such as skin lesions. Childhood events may also help explain trypophobia: a clustered or hole-y object may trigger in them traumatizing memories, such as the bumps of a serious allergic reaction from a bee sting. Lotus pods are a common trigger, as are sponges, coral, fungi, honeycombs, strawberry and cantaloupe seeds, animal spots, and even holes and bumps on skin.

For those who experience it, symptoms may include itching and, crawling sensations, nausea, and shakiness. The reaction, according to scientists, seems to be more of disgust than fear, as seen with established phobias. While trypophobia may sound uncommon and unusual, a 2013 study found up to 15% of participants experienced a negative reaction to trypophobia-inducing images.

…. i have lowkey trypophobia, unsure why i am simultaneously freaked out and love this…
buttercupsticksntricks, Tumblr, March 2017
blahgjksdaksdjaskdja just saw a post on facebook that triggered my trypophobia ughuhguhgu i'm itchy all over
@LiviDol, April 16, 2017
Apple unveiled its new iPhone models on Tuesday—but while some tech fans applauded the new phones’ design and specifications and others weighed in on their pricing, another feature has caught the eye of trypophobia sufferers everywhere.
Amy Woodyatt, CNN, September 11, 2019
SEE MORE EXAMPLES

As with other phobia words, someone who experiences trypophobia can be called trypophobic, a trypophobe, or trypophobics.

While it is not a clinically recognized phobia, trypophobia does describe a real negative reaction that some people experience.

Just learned about trypophobia. https://t.co/hhB0QR5pP0 Now I get why I can't look at lotus pods, let alone Suriname sea toads.

This is not meant to be a formal definition of trypophobia like most terms we define on Dictionary.com, but is rather an informal word summary that hopefully touches upon the key aspects of the meaning and usage of trypophobia that will help our users expand their word mastery.