What does carpe noctem mean?

Carpe noctem means “seize the night” in Latin or, in other words, “live tonight like there is no tomorrow.”

Where does carpe noctem come from? 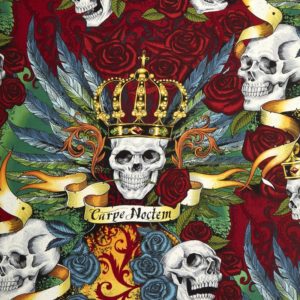 The expression carpe noctem is a play on the classic Latin expression carpe diem. Carpe diem literally means “seize the day,” but its sense is that you should make the most of the present and not worry too much about the future—a kind of dressed-up YOLO. The aphorism is taken from one of the Roman poet Horace’s Odes, written around 23 BCE, a beautiful ballad about the poetic fleetingness of life. 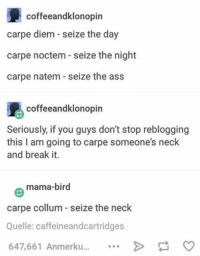 Carpe diem’s sibling, carpe noctem and meaning “seize the night,” is an, er, darker take. Early instances of carpe noctem appear in the 1800s. It was originally used as a play on carpe diem for those who needed to make the most of the night in order to be ready for work in the morning, such as by getting a good night’s sleep. 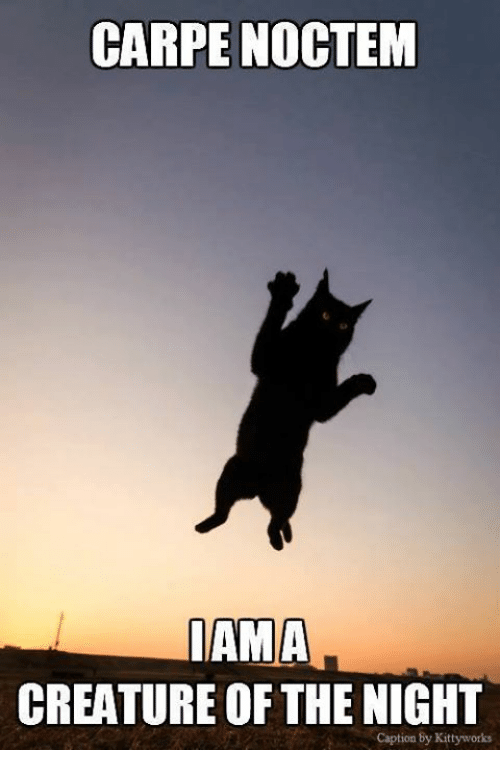 By the early 20th century, carpe noctem had taken on a more deviant meaning. It came to imply the recklessness of partying hard all night, as well as a particular relationship with the strange and occult.

By the early 1990s, carpe noctem had become firmly associated with the goth subculture. There was even briefly a Carpe Noctem goth lifestyle magazine, which launched in 1994.

Sometime those random last minute "hey, let's chill/go out for a bit" plans are the best. Carpe Noctem.
@THExRIDDLER15, February, 2018
There are those who seize the day, and those who "Carpe Noctem," according to a TV and social media campaign for Bacardi. Spoiler alert: The rum brand wants the night owls.
Amy Corr, MediaPost, October, 2016

Carpe noctem is the catchphrase for partiers looking to make the most of the night. It’s kind of like an upscale “Go hard or go home.” That party-hardy connotation is what makes it a favorite of party promoters and music venues looking to talk up their entertainment options.

Nothing describes a night of party at LIMA better than the Latin phrase, Carpe Noctem – Seize the night. #weekendvibes pic.twitter.com/gwBTu6C83w

In addition to club promos, carpe noctem is also still connected to the goth subculture and things that creep about at night generally—like vampires. An October 2001 episode of the Buffy the Vampire Slayer spin-off show Angel was called “Carpe Noctem.” In it, the main character Angel switches bodies with an old man in a retirement home. The old man certainly “seizes the night”: He uses Angel’s new body to pick up women, get in fights, and go out clubbing. Carpe noctem, indeed.

Brands that cater to the goth/partying lifestyle like to adopt carpe noctem as a name or slogan—whether they are selling vodka or forming a rock band.

This is not meant to be a formal definition of carpe noctem like most terms we define on Dictionary.com, but is rather an informal word summary that hopefully touches upon the key aspects of the meaning and usage of carpe noctem that will help our users expand their word mastery.