What does chutiya mean?

You don’t want to be called a chutiya by anyone but a friend: the term chutiya is a mildly offensive but popular Hindi and Urdu word meaning “idiot” or “fucker.”

Where does chutiya come from? 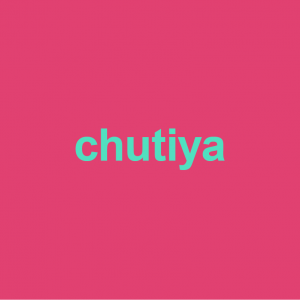 The word chutiya is a diminutive form of choot, which means “vagina” in Hindi and Urdu. An 1800s dictionary glosses it as a derogatory term for a “man who lives off his wife’s prostitution” or someone who kills themselves by “excess of venery,” i.e. by catching a sexually transmitted disease.

Across languages, vulgar terms for body parts have a way of becoming insults. Consider the English asshole. So, too, chutiya evolved from “vagina” to “idiot” or “dolt.” In contemporary use, Hindi speakers may refer to friendly familiars as chutiya, e.g., What’s up, chutiya? Chutiya can also function like the English fucking or Spanish puta, an all-purpose, sweary intensifer, e.g., Can you believe this chutiya weather?

Khan’s young warriors do cheer when the police beat up other protesters or the army abducts its detractors and makes them disappear. Khan’s critics call them “youthias”—a riff on chutiya, slang for a jerk.
Mohammed Hanif, The New York Times, July 23, 2018
when anyone says chuu because yall stan them, I used to feel like yall are saying chutiya in a short form
@lwtsourdiesel, August 13, 2020
It's a different story on Twitter bruh. Your friend called me a sanghi and chutiya without even knowing me, isn't this hate?
@TheLFCGuy, August 5, 2020
SEE MORE EXAMPLES

Chutiya is used throughout India by speakers of many languages, including Hindi, Urdu, and Telugu, as a mildly offensive slang term for “idiot.” Chutiya is also often used mixed into English-language conversations among speakers in or descended from the region.

Among friends, chutiya can be endearing, like calling a pal fucker to show familiarity and closeness.

Among strangers or in formal contexts, chutiya can be offensive, the kind of thing you would yell at a bad driver in a fit of road rage.

Others find the word offensive because of the way it turns a normal part of female anatomy, the vagina, into something derogatory, in the same way that pussy or cunt is offensive.

Don’t confuse this chutiya with an ethnic group in India, the Chutiya people, who may take their name from a root meaning “mountain.”

This is not meant to be a formal definition of chutiya like most terms we define on Dictionary.com, but is rather an informal word summary that hopefully touches upon the key aspects of the meaning and usage of chutiya that will help our users expand their word mastery.