What does ese mean?

Ese, amigo, hombre. Or, in English slang, dude, bro, homey. Ese is a Mexican-Spanish slang term of address for a fellow man.

Where does ese come from? 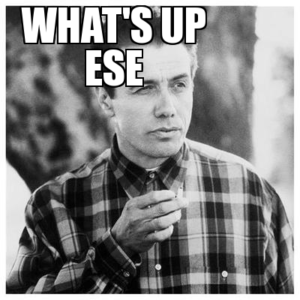 Ese originates in Mexican Spanish. Ese literally means “that” or “that one,” and likely extended to “fellow man” as shortened from expressions like ese vato, “that guy.”

There are some more elaborate (though less probable) theories behind ese. One goes that a notorious Mexican gang, the Sureños (“Southerners”), made their way from Mexico City to Southern California in the 1960s. Ese is the Spanish name for letter S, which is how the gang members referred to each other. Or so the story goes.

Ese is recorded in English for a “fellow Hispanic man” in the 1960s. It became more a general term of address by the 1980s, though ese remains closely associated (and even stereotyped) with Chicano culture in the US.

White confusion over ese was memorably parodied in a 2007 episode of the TV show South Park. On it, the boys think they can get some Mexican men to write their essays, but them men write letters home to their eses.

drop the loc ese i got you
@BLE4CHiGO, December 2018
I told my Mexican student to turn in his essay / He said "I ain't no snitch!".
NightmareBaloonBoy, Reddit, November 2015
I know my place, ese / I know my location / My station / Es aquí
José Antonio Burciaga, "El Juan from Sanjo" (poem), 1992 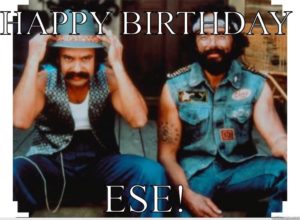 For Mexican and Mexican-American Spanish speakers, ese has the force of “dude,” “brother,” or “man,” i.e., a close and trusted friend or compatriot.

I needa kick it wit my ese's its been a minute

It’s often used as friendly and familiar term of address…

Always a good time with my ese. 😎 pic.twitter.com/xxM4YroWDV

…but it can also be more aggressively and forcefully.

Who you tryin' ta mess with, ese?
Don't you know I'm seeking professional help for my deep rooted emotional problemsssssss?!?

“You’d have to be crazy to swipe left.” Who you tryna get crazy with, ese? Don’t you know I’m loco? Sorry, always wanted to say that. Anyway, swipe left. Might actually be crazy.

It is often considered appropriative for people outside those cultures to use ese, especially since some non-Mexican people may use ese in ways that mock Mexicans and Mexican-American culture.

This is not meant to be a formal definition of ese like most terms we define on Dictionary.com, but is rather an informal word summary that hopefully touches upon the key aspects of the meaning and usage of ese that will help our users expand their word mastery.