or guey or wey or buey [wey]

What does güey mean?

Güey, pronounced “whey,” is Mexican slang for “dumbass” or “idiot,” although it is can also be used more as a slang term for “man” or “dude.”

Where does güey come from? 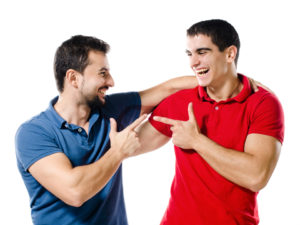 By the 1860s, buey had evolved into the form of güey in dialects of Spanish. The original buey is still sometimes used instead instead of güey in slang Spanish.

Guëy spread in popular slang in central America, particularly Mexico, over the 1900s. Language is ever changing, especially slang terms, and so güey softened in tone to a more casual term (of address) among male friends or acquaintances, à la “man,” “dude,” or “bro” in English.

I hate Jameson, why the fuck did I drink Jameson. Whoever is reading this dont let.lme do it again guey.

Serio guey, there’s always hot papis at this coffee shop
@IsamiraSlewa, January 2019
Once they're done, Morrison intends to retire from performing live. Given how much music he's given Salt Lake City over the past 25 years, that's a bummer, güey.
Randy Harward, Salt Lake City Weekly, March 2018 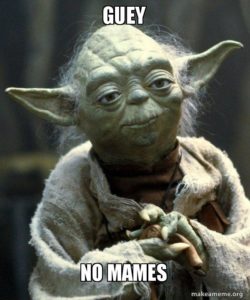 The word güey is especially associated with Mexican slang, but it’s used throughout central America and their populations/descendants in the United States.

As noted, güey is informal, so it wouldn’t be appropriate in business or other formal contexts.

Between friends (both male and female), güey is a friendly term to refer to someone without using their name. But güey can also be wielded as an insult.

Happy birthday to my roommate🥳 thanks for putting up with me and doing pendejadas with me 😇 te quiero guey 🥰 pic.twitter.com/ZddO4k6m9a

Güey is such a common slang term that it’s often used in Spanglish (mixed Spanish and English). It’s commonly found in the expression ¡No mames güey!, which roughly translates to “You’re kidding me!”

This is not meant to be a formal definition of güey like most terms we define on Dictionary.com, but is rather an informal word summary that hopefully touches upon the key aspects of the meaning and usage of güey that will help our users expand their word mastery.