any science or branch of knowledge.

What is the origin of ology?

The only people who would object to the formation of the colloquial noun ology, “any science or field of knowledge,” are those cranky, old-fangled philologists who insist on writing with a quill pen. Admittedly ology is a malformation—perversion if you like—for the correct (but meaningless) logy, but ology is easily extracted from common nouns like biology, geology, or theology, in which the –o– is a connecting vowel between the two halves of the word and not part of the combining form –logy. Ology entered English in the early 19th century.

how is ology used?

You learnt a great deal, Louisa, and so did your brother. Ologies of all kinds from morning to night.

This home was in a large town, and my uncle a professor of philosophy, chemistry, geology, mineralogy, and many other ologies.

Jules Verne, Journey to the Center of the Earth, translated in 1871

SYNONYM OF THE DAY
Double your word knowledge with the Synonym of the Day!
SEE TODAY'S SYNONYM
Load More
Dec 06 bonhomie
Dec 08 ology
Word of the Day Calendar

having branches that are erect and parallel, tapering to a pointed top.

What is the origin of fastigiate?

The rare adjective fastigiate, “having branches that are erect and parallel, tapering to a pointed top, like a Lombardy poplar,” is used only in botany and zoology. It comes from Medieval Latin fastīgātus “high, lofty,” from Latin fastīgium “height, highest point, summit, taper.” Fastigiate entered English in the 17th century. 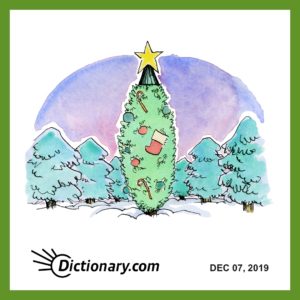 how is fastigiate used?

Most gardeners, looking for vertical features in a border, will turn to some conifer or other fastigiate shrub …

When one of two fastigiate oaks by her front door blew down in a hurricane, she watched it right itself, then called an arborist to prune its slender, upright branches.

What is the origin of bonhomie?

The English noun bonhomie, “frank and simple good-heartedness, friendliness,” still feels French and foreign. The French original, bonhomie, bonhommie, which appeared only 40 years before the English noun, has the same meaning as the English. Bonhomie is a derivative of the Middle and Old French bon homme, bonhom, literally “good man” and later “commoner, peasant.” Even today in French-speaking countries bonhomme is a respectful form of address. Bon homme comes from Latin bonus homō; its plural, bonī hominēs, especially referred to the Albigensian heretics (also Cathars or Cathari), who were exterminated in the 13th century by the Inquisition. Bonhomie entered English in the second half of the 18th century.

how is bonhomie used?

Lennon would fire up his fellow Beatles with a bit of call-and-response bonhomie. “Where are we going, fellas?” he’d ask, to which Paul, George, and Ringo would respond, “To the toppermost of the poppermost, Johnny!”

Einstein’s manner was full of charm and bonhomie.