[ ban-dan-uh ]
/ bænˈdæn ə /
Save This Word!
See synonyms for bandanna on Thesaurus.com
This shows grade level based on the word's complexity.
noun
a large, printed handkerchief, typically one with white spots or figures on a red or blue background.
any large scarf for the neck or head.
QUIZ
QUIZ YOURSELF ON AFFECT VS. EFFECT!
In effect, this quiz will prove whether or not you have the skills to know the difference between “affect” and “effect.”
Question 1 of 7
The rainy weather could not ________ my elated spirits on my graduation day.
affect
effect
TAKE THE QUIZ TO FIND OUT
Meet Grammar Coach

OTHER WORDS FROM bandanna

What does bandanna mean?

A bandanna is a type of large handkerchief, usually patterned and brightly colored. While used for many purposes, bandannas are commonly worn on the head, to hold back hair or absorb sweat, or around the neck to protect it from the sun.

Today, bandannas are often printed with a distinctive paisley pattern, are square, are made from cotton, and come in a variety of colors. Historically, bandannas were patterned with white spots on a red or blue background. Such a bandanna—red with white spots—is featured in the “We Can Do It!” wartime poster from 1943 created by graphic designer J. Howard Miller for Westinghouse Electric to help boost morale for its workers during World War II. In popular culture, the iconic, bicep-flexing woman wearing the bandanna in the poster has become Rosie the Riveter, though she is not technically that original character. 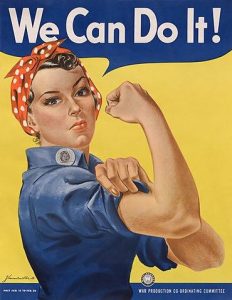 Another notable bandanna in U.S. history dates back to the very founding of the country itself. At the request of Martha Washington, the printmaker John Hewson, fashioned a red-and-white bandana featuring George Washington on horseback, his sword drawn and encircled by the words “George Washington, Esq. Foundator and Protector of America’s Liberty and Independency.”

Still, the bandanna remains a very practical item. During the 2020 coronavirus pandemic, many people used bandannas as makeshift, non-medical face masks to help prevent and protect themselves from the virus, which can spread through droplets expelled by coughing, sneezing, laughing, talking, and breathing.

Where does bandanna come from?

First recorded around 1745–55, the word bandanna comes from the Hindi bā̃dhnū, meaning “tie-dyeing.” Tie-dyeing is a process of dyeing fabrics by tying off parts of it, which prevents those parts from getting the dye and producing patterns as a result. And the practice of tie-dyeing is far older than any rainbow-colored, peace-and-loving attire of the 1960s.

Now, the Hindi bā̃dhnū is based on bāndhnā, “to tie,” derived from bandhati, a verb in the ancient language of Sanskrit meaning “he binds.” The word bind, here, is no coincidence. Bind is cognate to bandhati, as they are both derived from a common ancestor. That means bind and bandanna are related—if distantly.

An earlier form of bandanna was bandanno. Bandanna was probably first adopted in Portuguese and from there borrowed into English.

Bandannas may also bring to mind the Wild West, the textile worn by cowboys on the ranch—or hiding the face of bandits holding up the saloon. This connection may make you wonder: is the word bandanna related to bandit? Despite some similarity in spelling, bandit derives from the Italian banditi, “outlaws,” formed from a verb meaning “to bandish.”

Bandanna can also be spelled bandana. In fact, data indicates that the spelling bandana is becoming more common. But, whether you prefer spelling the word with two or three n’s, both bandanna and bandana are correct.

How to use bandanna in a sentence

/ (bænˈdænə) /
noun
a large silk or cotton handkerchief or neckerchief