[ klī′măks′ ]
Save This Word!
An ecological community in which populations of plants or animals remain stable and exist in balance with each other and their environment. A climax community is the final stage of succession, remaining relatively unchanged until destroyed by an event such as fire or human interference. See more at succession.
QUIZ
GOOSES. GEESES. I WANT THIS QUIZ ON PLURAL NOUNS!
Test how much you really know about regular and irregular plural nouns with this quiz.
Question 1 of 9
Which of the following nouns has an irregular plural form?
cactus
wallet
goat
party
TAKE THE QUIZ TO FIND OUT

What is a climax community?

A climax community refers to a stable ecosystem in its final stage of ecological succession. Succession is when one community of plants and animals replaces another in an ecosystem.

In a climax community, the plants and animals are in balance with each other and their environment. It remains this way unless destroyed or disrupted, as by a fire.

The idea of a climax community is not currently accepted by many ecologists, the scientists who specialize in ecology.

Why is climax community important in biology?

In everyday life, a climax is “a culmination or peak” of something, as in the climax of a story or career. The climax is the highest or most intense point or moment—what everything has been building toward.

In ecology, climax has a more specific meaning. To understand it, let’s first talk about the concept of ecological succession. Succession is the idea that an ecosystem is replaced by communities of plants and animals until it reaches a stable, balanced end stage. This end stage is called the climax, and the plants, animals, and other organisms that live in this ecosystem are called the climax community.

Imagine a rocky landscape somewhere in the American Midwest. First, some lichens form on the rocks. Then, some mosses move in. Over time, more and more soil particles accumulate, and grasses, then shrubs, then trees become the dominant plant life, until you have a large forest of beeches and maples. This is the general—and admittedly simplified—idea of succession, and this large forest (and all the critters that call it home) is the climax community. 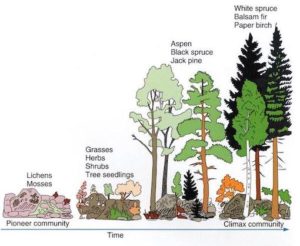 A climax community can take a very long time to develop and will vary based on climate—for example, a desert versus a rainforest. Everything in the climax community is stable and balanced. The niches are filled. The species are consistent in kind and number. The overall biomass stays about the same.

And, it will remain this way, so the theory goes, until some event disrupts it. This could be a natural disaster, like a major fire, or human interference. After that disruption, the ecosystem will undergo succession again until it reaches its climax again.

From the 1890s, the idea of ecological climaxes was especially developed by botanist Frederic Clements, who theorized that an ecosystem goes through a kind of fixed pattern of development culminating in a climax community. Most modern ecologists, however, understand ecosystems as being much more complex and dynamic, with successions able to occur even amid apparent stability.

What are real-life examples of climax community?

Climax community is especially seen in the context of general biology and ecology education. It may be used, for example, by a high-school teacher or in an early college textbook.

But as noted, current ecological understanding largely rejects any idealized, predetermined climax community. Still, the notion of a climax community remains a common, often useful way to understand how ecosystems develop and change, and how their species interact.

8⃣NATURAL SUCCESSION: What is it?
“A 🔹robust🔹 pioneer community has almost always the ability to evolve into a 🔹fragile🔹 climax community over time.”
For instance, from open plain to forest, from open water to marsh vegetation or the formation of coastal dunes. pic.twitter.com/uvn14zbxbG

How to use climax community in a sentence