Pronouns that point to specific things: this, that, these, and those, as in “This is an apple,” “Those are boys,” or “Take these to the clerk.” The same words are used as demonstrative adjectives when they modify nouns or pronouns: “this apple,” “those boys.”

QUIZ
QUIZ YOURSELF ON "WAS" VS. "WERE"!
Were you ready for a quiz on this topic? Well, here it is! See how well you can differentiate between the uses of "was" vs. "were" in this quiz.
Question 1 of 7
“Was” is used for the indicative past tense of “to be,” and “were” is only used for the subjunctive past tense.
true
false
TAKE THE QUIZ TO FIND OUT

What is a demonstrative pronoun?

Demonstrative pronouns are pronouns that point to specific objects. They take the place of a noun, noun phrase, activity, or situation. They always consist of this, these, that, those, and sometimes include none, neither, and such.

Demonstrative pronouns are taught in English Language Arts classes usually at the elementary or middle school level. They are an important element of numerous languages and allow for speakers to simplify complex sentences.

Why are demonstrative pronouns important in grammar?

Demonstrative comes from the word demonstrate, which means “to make evident or to show.” Demonstrate is from the Latin word dēmonstrāre meaning “to point out,” as you would point to something with your finger.

A pronoun is a type of word that replaces a noun (reminder, a noun is a person, place, or thing). Pronouns are words like she, you, him, them, this, and who, to name a few. For example, instead of “Carol likes apples,” one could say, “She likes apples.” The pronoun she is replacing the proper noun Carol.

The word pronoun has always (and only) been used in the context of grammar and language. The word pronoun is based on the Latin prōnōmen, with prō meaning “in place of” and nōmen meaning “name.” Simple enough, right?

OK, let’s put this all back together now. The words demonstrative and pronoun were combined in order to refer to a class of pronouns that point out specific things. Pronouns like this and that are pointing words that do the job of distinguishing which noun they have replaced. These pronouns demonstrate exactly what they are referring to.

This, these, that, and those can also occur in a sentence without naming the exact noun they are referring to. This usually requires the listener to have some background knowledge on the subject in order to understand what the speaker is referring to. For example, the sentence “These are so delicious” is grammatically correct, but unless you know what these is referring to, you may be a bit confused.

So, why do demonstrative pronouns matter? Well, first of all, we use them every single day. They allow people to vary their speech so the speaker does not have to constantly repeat the specific noun they are referring to, and they can help simplify complex sentences.

Additionally, they allow us to distinguish between objects we are referring to, such as in the sentence “Jenny received this from her mom, and that from her dad.” In this sentence, the speaker is telling the listener about two separate objects and their differences—they were given to Jenny by two separate people. 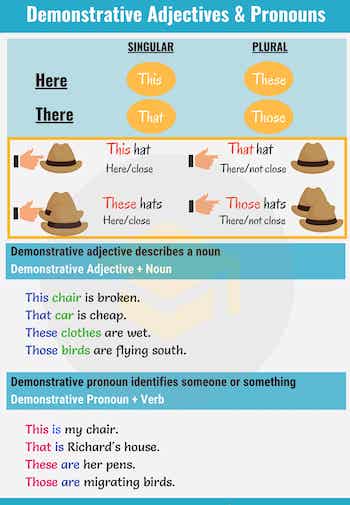 What are real-life examples of demonstrative pronouns?

Well, just about everyone uses demonstrative pronouns all day, all the time. The first place we probably learn them is informally at home through practice. Babies unconsciously pick up language from their caretakers in a process known as language acquisition.

However, we aren’t formerly taught what demonstrative pronouns are and what they are used for until we’re in elementary and middle school English class.

The use and misuse of words, such using adjectives as demonstrative pronouns, is ultimately changing grammar. https://t.co/Ij3xdYhLMq

Additionally, demonstrative pronouns are an important (and tricky) part of learning foreign languages.

Grammar nerds and those who think deeply about language are constantly referring to demonstrative pronouns, whether in regards to their place in our vocabulary …

Demonstrative pronouns are the enemy of songwriting. What is "this"? What are "those"?

… or simply as the punchline to a joke.

Have you been to MC Hammer's Museum of Demonstrative Pronouns in Atlanta yet? Apparently you can't touch this.

These are some important words that are just about everywhere. Thanks for sticking with us, in this Dictionary.com entry. (Hint: one’s a demonstrative pronoun, the other a demonstrative adjective, you got this.)

How to use demonstrative pronouns in a sentence