Save This Word!
dead on arrival.
QUIZ
WILL YOU SAIL OR STUMBLE ON THESE GRAMMAR QUESTIONS?
Smoothly step over to these common grammar mistakes that trip many people up. Good luck!
Question 1 of 7
Fill in the blank: I can’t figure out _____ gave me this gift.
who
whom
TAKE THE QUIZ TO FIND OUT

Dnipro, D-notice, DNR, DNS, do, DOA, doab, doable, do a disappearing act, do a double take, do a job on
Dictionary.com Unabridged Based on the Random House Unabridged Dictionary, © Random House, Inc. 2022

What does DOA mean?

DOA stands for dead on arrival. Outside of law enforcement and hospitals, DOA is used figuratively for a hopeless situation or something doomed from the start.

How is DOA pronounced?

Where does DOA come from?

DOA, for dead on arrival, is found around 1920–30 to describe a victim who is discovered already dead upon the arrival of first responders, such as police officers, or EMTs and hospital workers. Brought in dead (BID) is a similar expression.

DOA had become common enough outside the law enforcement and medical communities to title a classic 1949 film noir about a man who’s been poisoned. 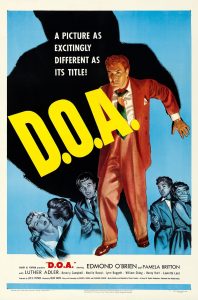 Since then, DOA has seen other uses in popular culture, from band names to professional wrestling promotions to a brand of fishing lures. In 1970, the rock band Bloodrock released “D.O.A.” about a plane crash victim.

How is DOA used in real life?

DOA is widely used by police officers and medical personnel to characterize the status of a victim.

The figurative DOA is used, less morbidly and for dramatic effect, to describe hopeless situations or things that just never had a chance in the first place. They were metaphorically dead before they even started. It’s often used in politics for bills or proposals that never had a chance of succeeding.

How to use DOA in a sentence