Save This Word!
noun
the economic crisis and period of low business activity in the U.S. and other countries, roughly beginning with the stock-market crash in October, 1929, and continuing through most of the 1930s.
QUIZ
QUIZ YOURSELF ON "WAS" VS. "WERE"!
Were you ready for a quiz on this topic? Well, here it is! See how well you can differentiate between the uses of "was" vs. "were" in this quiz.
Question 1 of 7
“Was” is used for the indicative past tense of “to be,” and “were” is only used for the subjunctive past tense.
true
false
TAKE THE QUIZ TO FIND OUT

When and what was the Great Depression?

The Great Depression was a worldwide economic crisis that lasted for much of the 1930s. It heavily impacted the United States, where millions of people faced unemployment, homelessness, and poverty.

In economics, a depression is a period during which business, employment, and stock market values fall to very low levels for a significant amount of time (typically more than three years). The Great in Great Depression refers to the fact that it was the worst depression in U.S. history.

The start of the Great Depression is often cited as the U.S. stock market crash of 1929, but its causes are complex. Its effects were also complex and widespread and are still discussed. Some can even be seen today in the form of government programs and agencies created to address the crisis at the time.

What were the causes of the Great Depression?

The Great Depression had worldwide reach. But it is especially remembered in the United States as one of the defining periods of the 1900s. It is considered the worst economic disaster in the history of the U.S., affecting every aspect of the economy and leading to severe conditions for much of the population.

During the “Roaring Twenties,” wealth in the U.S. grew, and people started to bet big money on the stock market. However, in 1929, people were not spending as much money, and production of goods started to slow down. Meanwhile, stock prices continued to rise. On October 24, 1929, investors started selling off their shares of overpriced stocks, causing stock prices to fall to very low levels—otherwise known as a stock market crash. This started a cycle: people started to spend even less money, business revenues fell, and companies laid off workers. Thousands of banks went out of business, unemployment in the U.S. rose to 25 percent, housing prices dropped sharply, and U.S. trade with other nations saw extreme declines.

In 1933, President Franklin Delano Roosevelt began to implement his “New Deal” plan for economic recovery. This included the creation of federal agencies responsible for regulating banks and aspects of the financial system, as well as programs to aid citizens directly, like the Social Security system and public works programs that helped people gain employment.

Economists debate whether these programs were directly responsible for the recovery, but by the late 1930s, the economy—along with living conditions for many people—began to improve. The entry of the U.S. into World War II in 1941 is often cited as the end of the depression.

The Great Depression is often used as a key period in U.S. history, and its causes and effects are still frequently discussed. Scholars propose various causes, often citing factors relating to banks, debt, inflation, drought conditions in the U.S., and tariffs (fees that make it more expensive to import goods). Its effects are complex and far-reaching. For many people, it meant a decade of poverty, moving around to find work, and bare-bones survival. In the U.S., it led to many, many agencies and programs that transformed the government and that still exist today.

During the Great Depression, charities frequently gave free food to people out of work. One soup kitchen in Chicago was operated by none other than notorious gangster Al Capone, and it was said to serve thousands of people per day.

What are real-life examples of the Great Depression?

The Great Depression was one of the defining moments of the 20th century and is often brought up as a point of comparison. For example, the 2000s recession is often called the worst U.S. economic crisis “since the Great Depression.” 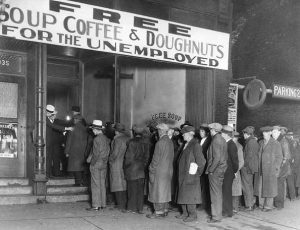 I’m all about the #Roaring20s but this time, can we prevent the stock market from collapsing and sending us into a Great Depression?

All these "Roaring Twenties" memes and themes going around…

The cavorting masses realize the original "Roaring 20s" was a post-war nightmare of Prohibition, the rise of dictatorships, and it all ended with the Stock Market Crash of '29 that began the Great Depression, right?

What other words are related to the Great Depression?

Which U.S. president came up with the New Deal plan to address the Great Depression?

How to use Great Depression in a sentence