Save This Word!
This shows grade level based on the word's complexity.
noun
fiction dealing with lurid or sensational subjects, often printed on rough, low-quality paper manufactured from wood pulp.
QUIZ
WILL YOU SAIL OR STUMBLE ON THESE GRAMMAR QUESTIONS?
Smoothly step over to these common grammar mistakes that trip many people up. Good luck!
Question 1 of 7
Fill in the blank: I can’t figure out _____ gave me this gift.
who
whom
TAKE THE QUIZ TO FIND OUT

What is pulp fiction?

Pulp fiction refers to a genre of racy, action-based stories published in cheaply printed magazines from around 1900 to the 1950s, mostly in the United States.

Pulp fiction gets its name from the paper it was printed on. Magazines featuring such stories were typically published using cheap, ragged-edged paper made from wood pulp. These magazines were sometimes called pulps.

Pulp fiction created a breeding ground for new and exciting genres. Though the heyday of pulp fiction magazines has passed, their eye-catching covers and dramatic, fast-paced, and simple stories have left behind a legacy that can be seen in today’s movies, TV, books, and comics featuring action heroes and over-the-top villains.

Why are pulp fiction stories important?

You probably know the term pulp fiction from the 1994 Quentin Tarantino film about criminals crisscrossing in the Los Angeles underbelly. But the title of the movie is a reference to the pulp fiction of the early 20th century, which paved the way for lurid stories like Tarantino’s. The sensational stories that became known as pulp fiction pushed the literary limit with racy tales of adventure and crime and popularized classic characters like hard-boiled detectives, ruthless villains, and bulletproof heroes who save the day and find romance along the way.

Unlike magazines printed on more expensive glossy paper (which were sometimes called glossies or slicks), pulps were affordable to the American working class and were often sold at newsstands. Pulp magazines had titles like Amazing Stories, Terror Tales, and Spicy Detective, and each issue usually contained several stories, including crime thrillers, whodunits, and fantastical adventures. A big selling point was their covers, which were as colorful as the characters inside—and often featured a beautiful woman in very revealing clothing. (Like the stories, the covers were the opposite of subtle.)

Pulps challenged the taste limits of American fiction, taking it to new and strange places beyond the boundaries of most mainstream fare. In fact, many conventional publishers looked down on pulp fiction, viewing it as trashy stories on cheap paper written by hack writers. But people loved it—a single issue could sell a million copies—and pulp magazines helped promote fiction that was more affordable and accessible (short stories with short sentences). Many well-known authors, like O. Henry and Ray Bradbury, got their start writing pulp fiction.

The popularity of pulp magazines faded after the 1950s, but their influence is easy to spot in modern media, which is full of pulp fiction elements: gritty crime, bold adventure, far-out sci-fi, gruesome horror, and dashing romance. Today, stories with a lot of these elements are sometimes described as pulpy.

Penny dreadfuls were British illustrated comics or storybooks featuring cheap thrills somewhat similar to those found in pulp fiction. Popular during the mid- and late-1800s, they were inexpensive (hence the name) and featured tales of pirates, murderers, and other violent action.

What are real-life examples if pulp fiction? 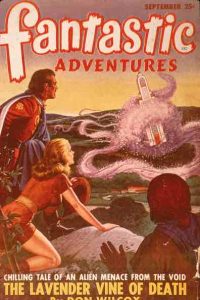 I'm trying to see my podcast channel as being like an old Pulp Fiction magazines, full of shorts & episodes. Crime, sleaze, drugs, etc.

Important to recognize that the early metal artists were often fans of pulp-fiction magazines, and early Sci-Fi films and books. Even mythology plays into that nerd culture we all love, and everyone from Dio to Zeppelin embraced it.

The bridge to get there is much broader.

What other words are related to pulp fiction?

Which of the following short story plots is closest to the genre of pulp fiction?

A. A mother and her son bond over making pancakes.
B. A detective investigates the theft of a mummy from a museum and has to save a beautiful woman from the gangsters who stole it.
C. A family tries to survive during the Great Depression.
D. Two brothers try to find the perfect birthday gift for their friend.

How to use pulp fiction in a sentence